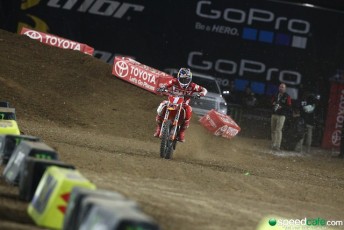 As the gates dropped in the 450’s, Dungey rounded the first corner in first place to collect the holeshot.

From there, the Red Bull KTM rider posted a perfect 20 laps en route to his fourth race win of the season and 26th of his career.

Dungey now leads Ken Roczen in the championship by 26 points or the equivalent of a full race win.

The runner-up place was a breath of fresh air for Seely’s season, following a couple mediocre rounds.

RCH Suzuki’s Roczen finished in third place after a strong charge through the field.

Roczen posted a calculated, precise ride limiting the damage from an average start.

Jason Anderson once again strapped on the afterburners for the last five laps of the main event, passing both Trey Canard and Eli Tomac after another poor start.

HRC Honda’s Trey Canard rounded out the top five after battling with Eli Tomac for the entire race.

Tomac trailed Canard and appeared to be vastly faster than the Honda rider, however was unable to find a passing opportunity and settled for sixth.

Marvin Musquin finished seventh and continues to impress during his rookie season, with Australia’s Chad Reed finishing a quiet eighth.

In the 250 class, Monster Energy/Pro Circuit Kawasaki’s Savatgy collected his second main event victory for 2016 and will head to the next round with sole possession of the points leaders red plate by virtue.

Savatgy led the field around turn one but by lap five he was being closely stalked by defending champion Cooper Webb.

Webb appeared to be comfortable in second and ready to pounce on Savatgy, when the Star Racing Yamaha rider lost traction with his front tyre and went down.

Webb was subsequently dropped back to fifth place, however by the end of the race made his way back up to second.

Last weeks winner Christian Craig quietly charged his way through the field following a poor start, and would see himself finish in third place.

Savatgy regains sole ownership of the points lead with 123 points with defending champion Cooper Webb only three points in arrears.

The AMA Supercross championship heads to Arlington Stadium in Texas for round seven of 17 next weekend.