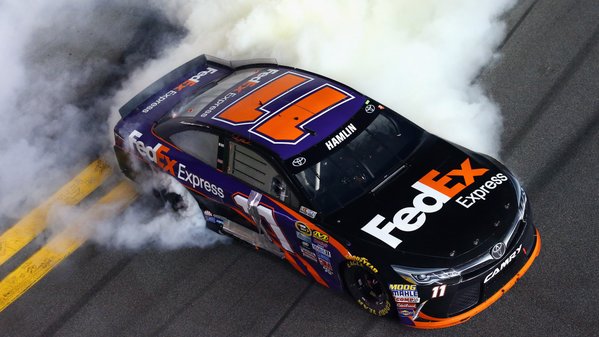 Denny Hamlin has won a crash fest in NASCAR’s version of a pre-season hit out, the Sprint Unlimited, at Daytona International Speedway.

With the 75-lap race forced to overtime, Hamlin was out front when a big crash involving Matt Kenseth, Marin Truex Jr., Brad Keselowski, Jamie McMurray, Greg Biffle and Danica Patrick brought out the caution flag midway through the final lap.

He led home Joey Logano and Paul Menard as the yellow and chequered flags waved.

That final re-start was set-up when another multi-car wreck involving Carl Edwards, Casey Mears, Kyle Busch, Aric Almirola, and Keselowski with three laps to run, brought the field together.

Hamlin, who suffered panel damage in an early incident, gambled on fuel and track position to start off the front at the final re-start. If not for a succession of caution periods, Hamlin would not have made the distance on fuel.

“This win couldn’t have been possible without my team-mates,” said Hamlin.

“Matt (Kenseth) sacrificed so much pushing me at the right time. Carl (Edwards) at the end there as well; it was a total team effort.

“It was a leader driven race and it’s good to start the year with a win.”

The Sprint Unlimited had its share of dramas with the Hendrick entries of Jimmie Johnson and Kasey Kahne involved in race-ending smashes. While damage to Dale Earnhardt Jr. also saw him finish out of contention.

Attention now switches to qualifying for the Daytona 500 which will occur tomorrow. The front row will be set after qualifying runs with the rest of the positions set later in the week in the twin-qualifying races.