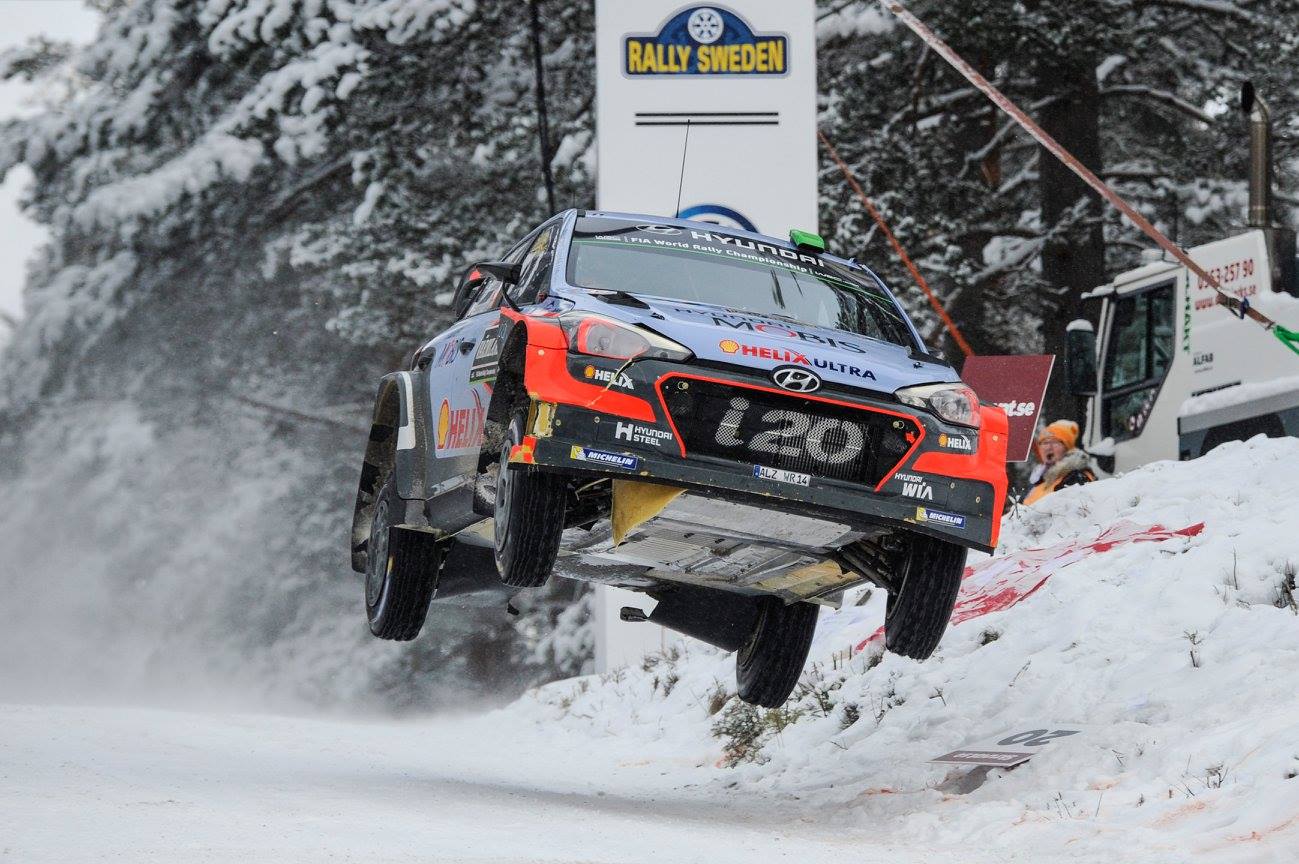 Paddon continues to star in Sweden

Hayden Paddon has pressed Sebastien Ogier through the second leg of Rally Sweden, with the Kiwi cutting the lead to under 10 seconds before the World Champion struck back.

Although Paddon carved into the Frenchman’s advantage in the snowy forest speed tests, Ogier repelled the Kiwi to eventually hold a 17.1s lead in his Volkswagen Polo R with just the live TV Power Stage remaining tomorrow afternoon.

Up to 10cm of snow filled the forests overnight and the slippery surface was bad news for road opener Ogier.

He ploughed a clean line which Paddon, starting six cars further back, took advantage of to pile on the pressure.

Although Ogier won the opening speed test to widen the margin to more than half a minute, the snow was deeper in the following test and Paddon cut the deficit to 8.8s on his debut in Hyundai’s 2016-specification i20.

Despite a heart-stopping sideways slide in the penultimate stage, Ogier regained vital seconds in the final three tests while Paddon managed the wear on his studded Michelin tyres as gravel reappeared on the roads.

“I was completely flat out. I took so many risks and couldn’t have gone any faster,” admitted Ogier.

Paddon is on course to equal his best result in the WRC.

“It’s been a good day. Obviously to consolidate our position in second is very good,” said Paddon.

“That was obviously the target today. we got pretty close to Seb there in the morning run when road conditions played into our hands.

“We weren’t able to quite keep pace on the afternoon stages, still we’re very happy to be where we are.

“It’s a short day tomorrow. We really just need to concentrate on maintaining the position. This would be a great result for the team and for ourselves if we can finish it off, so that’s the target now.”

Mads Ostberg lost third in the opening stage after flirting with a ditch, but quickly reasserted himself in the final podium place in his Ford Fiesta RS, 25.2s behind Paddon.

Andreas Mikkelsen briefly demoted his fellow Norwegian, but the Volkswagen Polo R pilot lost any realistic chance of a top three finish when he entered a corner too fast courtesy of an over-optimistic pace note and spun. He was 25.1s behind Ostberg.

Although he was uncomfortable on frozen gravel sections, Estonia’s Ott Tanak was fifth in another Fiesta RS, while a front left puncture slowed Dani Sordo and the Spanish i20 driver fell back from the podium battle into sixth.

Jari-Matti Latvala won two stages as he climbed to 27th following his disastrous opening leg. The only major retirements were Eric Camilli, who rolled his Fiesta RS heavily, and Yazeed Al Rajhi, who suffered broken steering after hitting a rock.