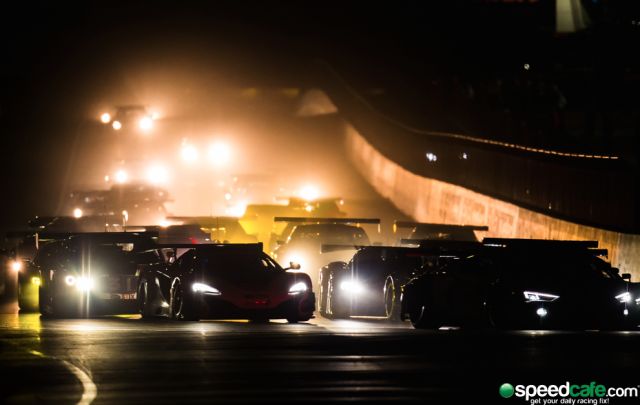 The start of Sunday’s Bathurst 12 Hour

Frontline factory drivers have grown confident with Australia’s greatest racetrack in the wake of the growing list of GT3 cars at the Bathurst 12 Hour.

Nissan V8 Supercars team co-owner Rick Kelly said after this year’s event that the performances of the leading internationals in the 12 Hour has “really opened up our eyes to drivers from overseas for October”.

Audi’s rapid Belgian driver Laurens Vanthoor and Bentley star Guy Smith are the latest to join a burgeoning group of internationals wanting to take advantage of their Bathurst experience and race in the V8 Supercars event.

A flood of GT stars is unlikely for this year, with most co-driver seats already full and the Nurburgring round of the Blancpain Endurance Series clashing with the opening round of the Enduro Cup, the Wilson Security Sandown 500 from September 16-18.

The drivers, however, are making no secret of their desire to come and compete in Australia.

Vanthoor in particular has been a longtime admirer of the Bathurst 1000 and held talks with Lucas Dumbrell Motorsport regarding a drive last year.

“There are some things as a racing driver that I want to have ticked from my bucket list,” Vanthoor told Speedcafe.com.

“Last year I had a clash and this year I have a clash so it will be difficult. It is unlikely teams are going to take a driver for two of the three races.

“If there is a team that is interested in two of the three races then I’m in for sure. However, I have the impression that they decide those things pretty early.

“I have signed with a new manager now and I have told him I’m interested in V8 Supercars so we will see.”

Yorkshireman Smith’s career was defined in 2003 when he won the Le Mans 24 Hour for Bentley alongside Tom Kristensen and Dindo Capello.

“Now I feel like I know the track it would be great to definitely have a look,” Smith said.

“I would put my hand up now. The racing here is fantastic.

“I spent a lot of years in America and this is very similar, hard racing and a great atmosphere.”

In machinery familiar to them, the leading internationals proved more than a match for their local co-drivers in the Bathurst 12 Hour.

Nissan’s Katsumasa Chiyo was the standout international star in the sole GT-R turning a fastest race lap of 2:02.46s compared with his team-mate’s Rick Kelly (2:03.19s) and Florian Strauss (2:03.63s).

Chiyo is also unavailable for this year’s Pirtek Enduro Cup due to a clashing SuperGT commitment.