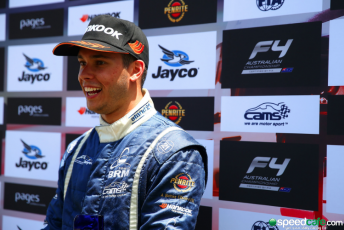 Australian Formula 4 champion Jordan Lloyd will head to America to contest the USF2000 Championship this year.

The 20-year-old from Toowoomba will join the Pabst Racing outfit in the team’s third car for the 16 round series which is part of the Road to Indy platform.

Lloyd emerged as the class of the field in the CAMS Jayco Australian Formula 4 last season recording 12 victories on his way to the inaugural title.

The Queenslander has already experienced a taste of the popular American open-wheel category when he joined John Cumminsky Racing for four races last year.

“I only touched the tip of the iceberg when I was here in 2015, so on a personal level there is a lot of unfinished business that needs to be tended to,” said Lloyd.

“I am looking forward to a strong season.

“The atmosphere on the American racing scene is many steps above what I have raced previously.

“I also could not be thankful enough for the opportunity from CAMS, the Australian body of motorsport, and of course Jayco Australia for making it happen.

“Additionally, I need to thank Mark Larkham from the Australian Motorsport Academy for introducing me to the Pabst Racing Team.”

A pre-season test at Barber Motorsport will take place from March 6-7 prior to the St Petersburg season opener from March 11-13.