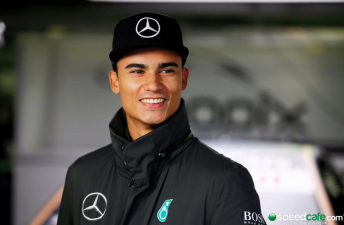 Mercedes protege Pascal Wehrlein has been confirmed for a full Formula 1 season with Manor Racing.

Confirmation the 21-year-old Mercedes reserve driver comes as the Manor team undertakes a considerable contract with the three-pointed star brand.

Although Manor will receive latest spec Mercedes engines and have access to the team’s wind tunnel at Brackley, Wehrlein’s hiring is said to be separate to the aforementioned agreements.

After sensationally winning the DTM Championship last year, Wehrlein is the only confirmed driver for Manor with Alex Rossi, Will Stevens and GP2 star Rio Haryanto all in the mix for the second seat.

Manor has undergone a huge shake-up in the off-season after it was saved from shutting down at the start of 2015.

Team founder John Both and president Graeme Lowdon have gone with Kiwi Dave Ryan becoming the new sporting director along with the acquisition of Pat Fry and Nikolas Tombazis.

Manor boss Stephen Fitzpatrick said Wehrlein was the perfect choice as the team attempts to lift itself off the bottom of the grid.

“Pascal is a sharp driver with a very promising future,” Fitzpatrick said.

“We’ve chosen a driver with the talent and hunger to match our ambitions.”

Wehrlein steps up to F1 after three seasons in the DTM, which followed spells as a front-runner in Formula Masters and FIA European Formula 3.

“Manor Racing is a great place for me to start my Formula One racing career,” he said.

“It’s a small and totally focused team and I soon hope to know everyone.

“Though it’s my first F1 season my aim is to help Stephen and the guys achieve their goals.

“It will be a tough challenge but I think we should be able to challenge for points along the way. It’s going to be good fun.”

Wehrlein will carry his DTM number of #94 into F1, signifying his birth year of 1994.