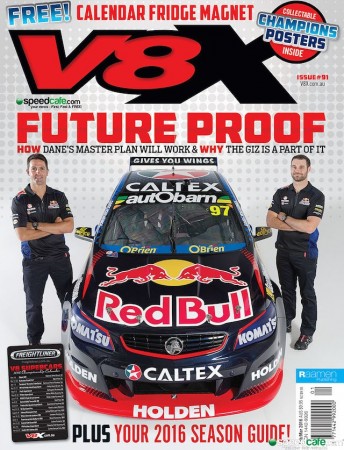 The print and digital editions of V8X Supercar Magazine issue #91 (February/March 2016) are on sale now.

V8X Supercar Magazine issue #91 is your complete guide to the 2016 V8 Supercars season, including driver and team profiles, event guides and more.

The print edition comes with a free Freigtliner 2016 V8 Supercars calendar fridge magnet, so you’ll never miss an event of the upcoming season.

Included in the print edition is a two-sided pullout poster featuring the 2015 champion Mark Winterbottom on one side and the V8 champions from 1993 to 2015 on the other.

The digital edition is also available in the official V8X app (in the App Store and Google Play), online at DigitalEdition.V8XMagazine.com.au and in the Magzter app store.

As part of Speedcafe.com’s alliance with V8X, the magazine is available for purchase directly through the website.

Driver profiles – meet the drivers set to do battle this season

Musical chairs – the silliest season explained by the drivers themselves

Event guides – calendar and event profiles for the 2016 season

The bridesmaids – the best drivers never to win a championship

Reed & Ashby: the Lansvale boys – The story of two school friends who went racing and rewrote the record books

The important factors that will shape 2016

ANALYSIS – battle of the brands
Is V8 Supercars losing manufacturers to GT racing?

Snapshot of the key news issues

Frosty on defending his V8 Supercars championship in 2016

Rogers on why V8 Supercars should adopt NASCAR-style big numbers