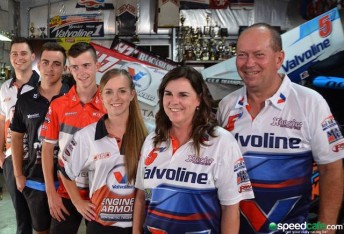 Six members of the Dumesny family will take part in the one event at Sydney’s Valvoline Raceway on Saturday night.

Australian sprintcar legend Max Dumesny will take on his wife, Melinda and their four children, Mitchell, Matt, Michaela and Marcus.

“When I agreed to do this I don’t think any of us had any idea of what might be involved,” said four-time Australian Champion, Max Dumesny.

“As we’re getting closer to Saturday I’m still not sure what we’re getting ourselves into but the public reaction has been pretty amazing. It’s obviously something that people want to see.”

Melinda, the daughter of Sydney Sprintcar identity Sid Moore, is making a comeback to the track in a decorated career which has included competition Australia and at the famed Knoxville Raceway in the US.

Mitchell Dumesny has returned this season after a serious back injury and has been alternating in a driving role with sister Michaela, who also doubles as Valvoline Raceway’s pit reporter.

Matt is a former Motocross racer who has turned his hand to Sprintcars, whilst Marcus made his debut this season at the tender age of 16.

The Dumesny family race will be part of the Ultimate Pink Night at the Speedway, where all women will be admitted for free to raise awareness for Breast Cancer.

The crowd is encouraged to wear pink and donate on the night with all proceeds raised going to the National Breast Cancer Foundation.

“There are so many people within our speedway family who have been touched in one way or another by breast cancer,” Speedway Managing Director, Steven Green, said.

“So when it came to choosing a main charity to support, the National Breast Cancer Foundation was a no brainer.

“We’ve all had or know of mothers, sisters, aunts, wives affected by this awful disease, so we decided that only will we be asking for donations, but we will open the gates and welcome all women with open arms at no cost.”