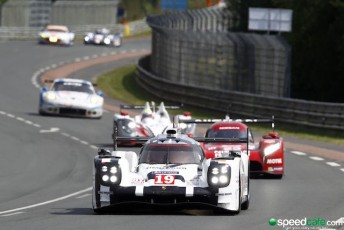 The American-style SAFER barriers are set to be installed at the Porsche Curves as part of ongoing circuit upgrades at Le Mans.

The SAFER (Steel and Foam Energy Reduction) barriers will be placed at what is widely recognised as the most dangerous part of the 13.6km track where LMP1 runners circulate at colossal speeds.

In recent years several drivers have had lucky escapes from huge crashes at the Porsche Curves.

More notably Audi star Loic Duval was forced to miss the race after destroying his R18 in Wednesday practice before the Le Mans 24 Hour in 2014.

GM factory driver Jan Magnussen also endured a heavy crash in his Corvette in qualifying last year, forcing the team to withdraw from the race.

The implementation of the energy absorbing barriers comes after FIA, circuit, and ACO officials recommended the move to the North American-designed system.

The barriers are constructed of a tubular steel skin where energy from an impact is distributed into foam cartridges.

Other changes to the circuit include extending the gravel trap at Arnage Corner.

A roundabout is planned on the public road section at Arnage however it will not have any impact on the race circuit.