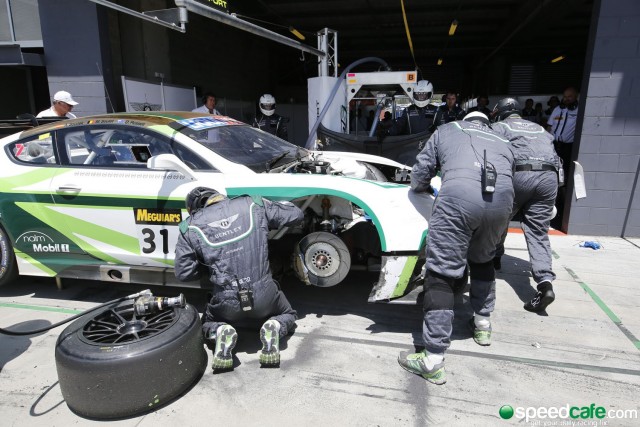 David Russell was left to rue a missed opportunity following an eventful debut as a factory Bentley driver during the Bathurst 12 Hour.

Having qualified eighth in the hands of Soulet, the car dropped down the field early on following contact between Russell and the #60 McLaren driven by Rob Bell at The Chase when the Queenslander attempted an overtaking move.

After recovering from a subsequent puncture the Bentley returned to lead the race, emerging as a genuine contender for victory before drama struck in the sixth hour.

Running in second position with Russell at the wheel, a gearbox failure in the #38 Wall Racing Porsche coming out of The Cutting left the Bentley driver with nowhere to go.

The resulting contact with the rear of the Porsche forced the Bentley to make several trips to the pits to fix the damage ending their hopes of a strong result.

“I think over the weekend I worked well with the team. 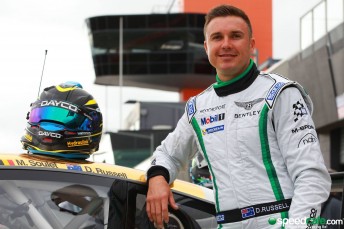 “They wouldn’t have employed me if they didn’t think I had the pace.

“There was nothing I wanted more than to get a 12 Hour win with these guys and that was what was presenting itself earlier in the race.

“I think we would have been a in a good battle with our team-mates and the others at the front (had that issue with the Porsche not happened).

“You only have to look at the car’s pace towards the end of the race to see that.

“We had a very strong line-up. It is disappointing. Seventh wasn’t what we had planned.”

Russell said he was caught out by the McLaren in the early race contact which appeared to open the door for him to pass at The Chase, while there was nothing he could do to avoid contact with the Porsche later in the race.

“The reality of it was there was blocking, blocking and then the door got opened for me.

“But then he wanted to fight around the outside which I certainly didn’t expect someone that was getting past to go side-by-side through the left at the Chase.

“When someone blocks and blocks then opens up its the sign of ‘off you go’ (and pass me). The move would have stuck if the guy that was being overtaken didn’t fight it.”

Bentley director of motorsport Brian Gush said he was impressed with how Russell adapted to the car on his debut but felt in hindsight the early contact could have been avoided.

“I think a 12 hour race is a long game to be played rather than a short game so we need to win the race at the end of the 12 hours and not in the first two,” Gush told Speedcafe.com.

“He is a Silver driver and a very quick one so for events like this we will always look around.

“Apparently the transmission on the Porsche seized and he had nowhere to go.

“It was a pretty hard hit but compliments to the team for getting the car going again. The guys never say die.”