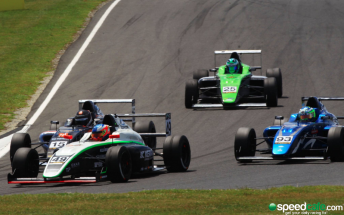 F4 will be a six-round championship this season

The CAMS Jayco Australian Formula 4 Championship will be contested over six rounds this season, with a planned trip to New Zealand now off the calendar.

The junior open-wheel category was scheduled to join the Australian GT Championship’s Highlands 101 meeting at Highlands Park in Queenstown for its season finale on November 11-12.

Its removal from the F4 calendar comes amid a push to reduce costs in the category as teams work to secure drivers for its second season.

Five rounds will be contested alongside the V8 Supercars, including the season opener on at Symmons Plains on April 1-3, with one supporting the Shannons Nationals in Sydney.

CAMS has announced a new $165,000 cost target for the category following the removal of a round and other changes to its insurance, prize fund and testing structure.

“Our mission is to ensure the category is accessible and sustainable from a cost perspective for our most talented young drivers,” said CAMS CEO Eugene Arocca.

“To this end, we have been able to secure a more favourable arrangement to insure the competing cars, meaning the full insurance cost will now be included in the new lease fee of $35,000.

“This, along with several other measures, will reduce the cost to the driver of around $165,000 (excluding testing), while maintaining a presence at some of Australia’s best circuits and significant free-to-air and pay television coverage.

AGI Sport team director Adam Gotch added his support for the changes in a CAMS statement.

“It is important the category is affordable and CAMS, with their partners, have done a great job to ensure this is the case,” he said.

“There is plenty of interest from talented drivers so we are really positive about this year and the future of the category.”

This season will mark the first time that Australian F4 has raced across a full calendar year, with its seven-round 2015 championship having kicked off in July.