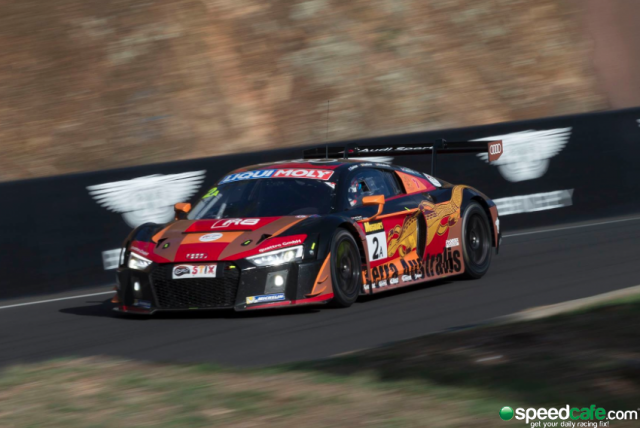 Balance of Performance was called into question during Sunday’s race by Audi teams amid a lack of top end performance compared to its rival manufacturers.

Among the quickest cars over the tight and twisty second sector of the 6.2km circuit, the R8 LMS GT3 was left vulnerable on the long Mountain and Conrod straights.

Audi GT star Laurens Vanthoor was uncharacteristically vocal about the situation, claiming his Phoenix Racing R8 was as much as 10km/h slower than its rivals.

Despite the speed disadvantage, the Phoenix Audi led the race briefly during the final third before dropping to fourth as it struggled to compete with the McLaren, Nissan and Bentley.

SRO boss Stephane Ratel has responded to criticism of the BoP by confirming his technical director Claude Surmont will look into possible tweaks on the Audi figures for next year’s race.

An extensive BoP test is scheduled for the end of the month at the Paul Ricard circuit in France.

“The Audi is a car which has quite a lot of downforce and if you look at pure lap time the car is good,” Ratel told Speedcafe.com.

“But it is a car which finds it difficult to overtake on a circuit like this because you can’t really use your downforce to pass other cars.

“BoP is an equation between downforce and power so the more downforce you have the less power you have. Cars that have less downforce will have more power.

“We will certainly look at it and maybe we need to adjust it for this type of circuit and work on the acceleration.

“The (Phoenix Audi) car was leading the race. Maybe they lost out on the tyre situation because the Pirelli was a little bit faster than the Michelin.

“Given that we are at the start of a new season we are having this big BoP test at Paul Ricard at the end of the month and we will find the BoP for this season.”

Stopping short of blaming the Phoenix Audi’s struggles solely on BoP, Vanthoor admitted it was a significant factor which he hopes will be resolved for next year.

The 24-year-old described the experience as mentally draining knowing that he didn’t have the tools to fight for the victory.

“We were very good up the top of the mountain and the others were quick on the straight so it made it difficult to overtake,” Vanthoor told Speedcafe.com.

“The places we would catch the cars were areas where it was impossible to overtake.

“It is not correct that we are so much quicker across the top of the mountain. We have to be slowed down in the corners and be quicker on the straights so we can have a fair fight with the other guys.

“I have spoken to the guy responsible for the BoP and they are definitely going to look into it and try to improve it. I’m sure they will find a solution.

“He (Surmont) is a nice guy and he has a very difficult job.

“Everybody is probably pointing fingers at him all the time and breaking his balls. He is trying find the best for everybody.

“Now there is something that needs to be addressed. He understood and is going to look into it.

“I’m pretty confident I will be back to Bathurst next year. I’m sure one day it will work out.”