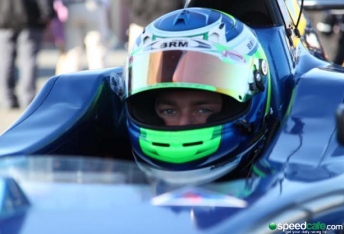 After finishing ninth in the inaugural running of the junior single seater category for Team BRM, the Queenslander took part in an end of season test F4 test in Valencia, which prompted an approach from Double R Racing.

Goddard will join fellow Australian and F4 rival Luis Leeds, who has signed a deal to compete in the championship with the Arden squad.

“I feel extremely privileged to compete overseas this year in the MSA Formula Championship with Double R Racing,” said Goddard.

“It will be a great opportunity and certainly a big challenge to race against top quality drivers from all corners of the globe.

“I can’t wait to get across to Britain, meet my team and get into my car for the first time and acclimatise myself with my new surroundings.

“I am very eager to go onto some of Britain’s greatest circuits throughout the season, such as Silverstone, Brands Hatch and Donington.

“After a big year in 2015 where I was able to compete on a mixture of street and purposed built circuits, it will be great to adapt and become used to some of the technicalities of these famous British circuits.

“The move to live in Britain for the season will bring with it some challenges in itself but I’m prepared for anything to make my career prosper.”

Goddard will kick off the MSA Formula season with a visit to Brands Hatch from April 2-3.