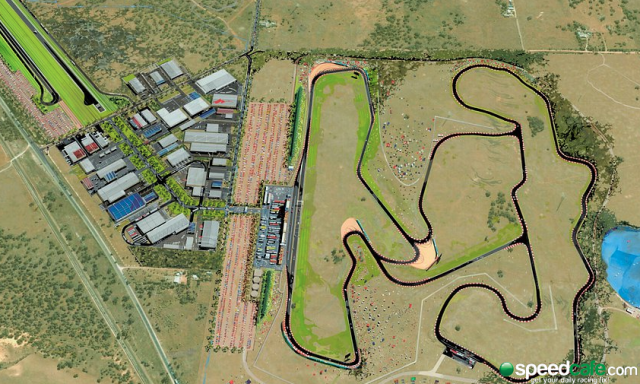 Initial moves are underway for South Australia’s new Tailem Bend circuit to host a round of the MotoGP World Championship.

Spearheaded by prominent SA businessman Sam Shahin, the ambitious project is currently in its final stages of planning and design before construction of a full 7.2km circuit commences.

SA Motorsport Park is aiming to achieve an A level grading with the FIM, which will allow it to host all tiers of motorcycle racing, as well as FIA Category 2 status permitting all four-wheeled motorsport outside of Formula 1.

Situated 100km south-east of Adelaide, SA Motorsport Park plans to open in 2017, with hopes of securing a major international act for the following year.

The venue’s recently appointed general manager of commercial operations, Damien White, confirmed to Speedcafe.com that Shahin has a MotoGP round in his sights.

“Sam has made no secret of the fact we have an appetite to host the highest level events, and a round of the MotoGP Championship fits the brief I’m working to,” said White.

“We were enthused, but not surprised, at Mr. Uncini’s reaction when he visited.

“It’s not until you physically see the layout that you truly understand its character. And like every great circuit, Tailem Bend has plenty of character.

“We continue to work with FIM and FIA to attain final approvals. When completed we will be licensed to conduct every category except Formula 1.”

Uncini is expected to complete a safety and design report following his visit, seeking input from MotoGP riders as part of the process.

The Italian expressed enthusiasm for the possibility of Tailem Bend one day joining Victoria’s Phillip Island venue on the MotoGP calendar.

“In general the circuit is very safe and very exciting,” Uncini told the Adelaide Advertiser during his visit.

“I have worked with (Shahin’s) Peregrine Corporation for some time and it is fantastic to be here for the first time and see this fantastic layout.

“There is no reason not to have two MotoGP events in Australia.”

As previously reported, SA Motorsport Park currently holds a memorandum of understanding with V8 Supercars that could also see it join the domestic touring car championship’s calendar as soon as 2017.