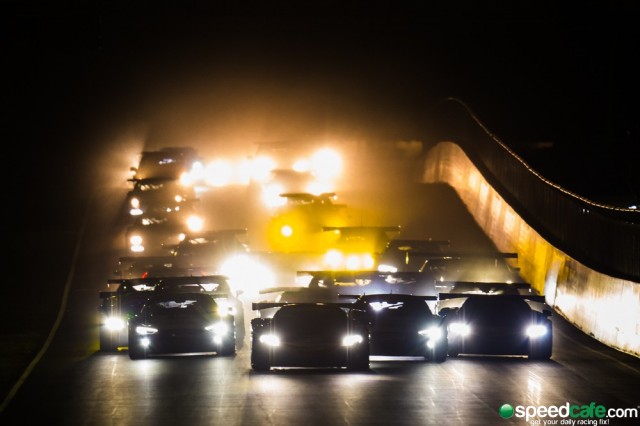 The start of Sunday’s Bathurst 12 Hour

Global GT boss Stephane Ratel is keen to see the introduction of an all professional class in the Liqui-Moly Bathurst 12 Hour to fall into line with worldwide GT3 endurance events.

The Blancpain GT Series founder made the trip to Mount Panorama for the once around the clock classic which hosted the opening round of the new Intercontinental GT Challenge Series.

Since the Bathurst 12 Hour adopted GT3 machinery in 2011, regulations dictate that teams must field an ‘unseeded’ driver in their line-ups to be eligible to compete.

This ruling sees the Bathurst 12 Hour sit on a different footing compared to other high profile GT3 endurance races, including its Spa 24 Hours and Sepang 12 Hour Intercontinental GT Challenge Series counterparts, which each have a professional class.

The Bathurst 12 Hour’s driver seeding rules have proved to be a contentious issue among both teams and drivers, with a late rating change for several V8 Supercars full-timers ahead of this year’s event adding to the controversy.

While describing Bathurst as the perfect location to kick off the new Intercontinental GT Challenge, Ratel believes the adoption of an all pro category would alleviate the seeding dilemma.

“I would encourage it (the introduction of an all pro class) because to have a high profile event which depends on driver grading is a bit difficult,” Ratel told Speedcafe.com.

“There is a lot of tension in the pro-am class. This is only my opinion and we don’t interfere with the running of the event.

“The technical regulations we look after and BOP we are in charge. The sporting regs is up to them (V8 Supercars) and they know their market.

“It is a beautiful event. It is professionally run and it has a good fan base, there are a lot of every enthusiastic people and I think it can grow.

“We couldn’t have dreamt of a better start for the Intercontinental GT Challenge Series and I hope this will be the first round for many years to come.”

A move to introduce a professional category would be welcomed by the M-Sport Bentley boss Malcolm Wilson, who described the current driver seeding rules as the race’s only negative.

Bentley has contested the last two editions of the race which has seen them forced to drop two of its regular drivers in favour of silver rated pilots to compete.

“If there is something a bit different about this race compared to others we do it’s that you’ve got to run one silver guy,” said Wilson.

“But in an ideal world we would run all of our six drivers.

“You’ve got to drop somebody from your team and it just makes it a little bit awkward.

“This is the only race where we have to do it. It’s a small thing but if there was a negative that would be it.”