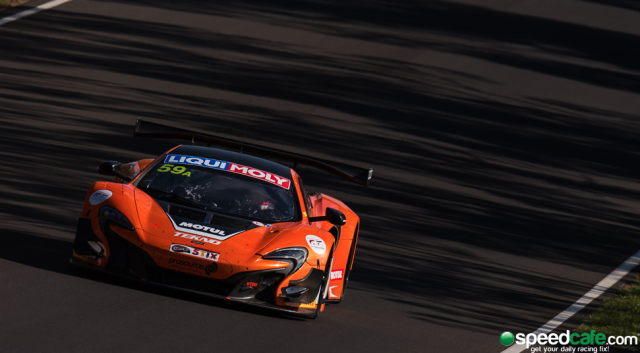 Tekno and McLaren took out the Bathurst 12 Hour

Shane van Gisbergen overcame a reliability scare and a drive-through penalty to score victory for Tekno Autosports and McLaren in the Bathurst 12 Hour.

At the end of a typically dramatic day of racing, the Van Gisbergen/Jonathon Webb/Alvaro Parente McLaren cruised to the flag 1.3s ahead of the Katsumasa Chiyo/Rick Kelly/Florian Strauss Nissan.

It marks the first win for McLaren in a major GT3 endurance race and the perfect start to the famous British marque’s association with Australian V8 Supercars team Tekno.

The combination of Van Gisbergen and the McLaren proved untouchable for pace, with the Kiwi taking pole on Saturday before resetting the outright lap record as he stormed away from the field in the race’s opening stages.

While Van Gisbergen was in the car for the start and the end, Tekno’s strategy left Parente and Webb to share the driving for the majority of the day.

Parente endured a major scare when an electronic issue forced him to stop on track during the fourth hour, losing 45 seconds as he reset the car.

Webb eventually handed back to Van Gisbergen with two hours remaining, setting up the Kiwi for the final two stints to the flag.

A drive-through penalty for speeding on pit exit then threatened to ruin the team’s day as it dropped the McLaren almost two minutes from leader Chiyo in the Nissan.

Topping off on fuel under Safety Car with 90 mins to go, however, eventually allowed Van Gisbergen to emerge in the lead when the final stops shook out 40 minutes later.

Erstwhile leader Chiyo was 14s adrift when he rejoined the circuit and proved unable to make significant ground on the McLaren until Van Gisbergen started to ease off in the final minutes.

Although starting down in 13th, the Nissan proved one of the fastest cars all day, leading a race high 107 laps, five more than the Tekno McLaren.

Kane and the #10 Bentley a survived touch with the wall during the race’s second quarter and led 28 laps throughout the day, but did not have the pace to fight as the track temperatures increased throughout the afternoon.

The Phoenix drivers meanwhile bemoaned the lack of straightline speed in their Audi but managed to remain in the fight with clever strategy that saw the #2 R8 make five less pitstops than the eventual winner.

Fifth place went to the #36 Erebus Mercedes, which lost a lap in the pitstop cycle at the end of the ninth hour that it proved unable to get back across the closing stints.

Sixth outright and victory in the amateur GT3 class went to the #5 GT Motorsport Audi, which saw its nearest rival, the #40 Hanleys Surveys sister entry, fall foul to a race ending puncture with 90 minutes remaining.

The rapid #31 Bentley, #75 Jamec Pem Audi and #60 McLaren filled seventh through ninth respectively after all three endured major setbacks in the opening hours.

Scott McLaughlin and Earl Bamber led Grove Racing to a 15 lap victory in Class B, while Class I went to the #93 MARC Mazda, despite a mid-race trip to the Murray’s Corner sand trap.

The Mazda’s off triggered one of 13 Safety Cars, ensuring over a quarter of the 12 hours was run under full course yellows. 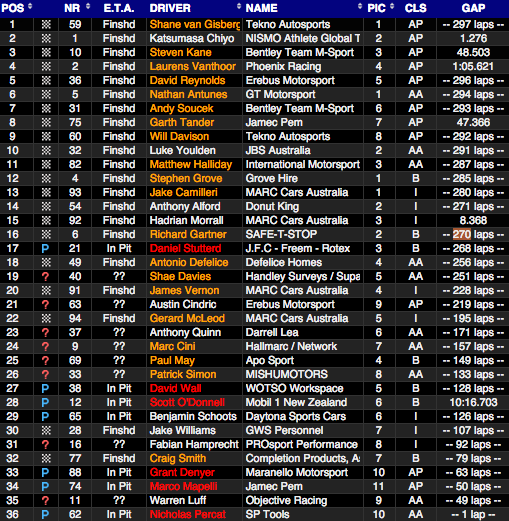