Nissan on top at halfway in Bathurst 12 Hour

Nissan on top at halfway in Bathurst 12 Hour 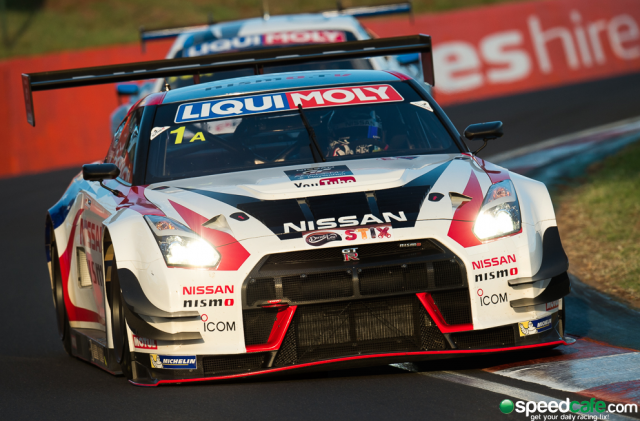 Nissan’s Bathurst 12 Hour title defence is on track at the halfway mark, with Japanese ace Katsumasa Chiyo leading the way.

Amid a raft of issues for its nearest rivals, the Nismo team’s disciplined approach from a lowly 13th grid spot has seen the GT-R rise to the front.

Set up by strong early stints from Rick Kelly and Florian Strauss, Chiyo leads Jonathon Webb’s #59 Tekno McLaren by two seconds at the end of six hours and 152 laps of racing.

The #10 Bentley, #36 Erebus Mercedes and #37 Keltic McLaren are the only other cars currently on the lead lap.

“We’ve done almost as much as the Bathurst 1000 but it’s early days, we’re only just getting started,” said Kelly.

“We’ve seen a lot of the top runners go out so we’ve just tried to be a bit more conservative to try to make sure we’re around for the end.”

Webb’s strong position comes despite a heart stopping moment at the end of the fourth hour that saw the McLaren stationary on the pit straight with Alavro Parente at the wheel.

A full system reboot saw the Portuguese driver lose 45 seconds before blasting back into the fray.

Fortunately for Tekno, the race’s third Safety Car followed soon after to retrieve the ProSport Porsche Cayman, which had spun into the wall at the exit of The Chase.

Among those to pit under the Safety Car was the #63 Erebus Mercedes of Bernd Schneider which, was trapped the best part of a lap down as the lead Bentleys waited until late in the yellow to make their stops.

Any chance that Schneider could regain the ground was soon dashed when a broken rear diffuser required an unscheduled stop.

The race ran green for a further half hour before the Vicious Rumour Ferrari stopped on the circuit, triggering another yellow and further trouble for Erebus.

Both Mercedes entries were delayed when confusion over which car should take which pit bay resulted in the boom falling onto its #63 Mercedes.

“The Schneider car was meant to go to bay one and then was changed to bay two,” explained Erebus’ Daniel Klimenko of the incident, which saw the #63 fall two laps down.

“We had to change the tyres from bay two to bay one.

“Dave (Reynolds) then overshot and the booms don’t like to overreach. Luckily no one got hurt.”

Bentley was the next in trouble, with Steven Kane pitting from third place with a right rear puncture in the fifth hour.

Crucially, the team was able to pit the #10 Continental GT and return Kane to the track still on the lead lap.

Running second, team-mate David Russell was not so fortunate when he clouted the back of the #38 Wall Racing Porsche as it struggled with gearbox issues during hour six.

After replacing a punctured right-rear tyre and sending the Australian back out, Russell was forced to head to the garage for further repairs to the car’s bodywork, losing a total of five laps.

The Phoenix Racing Audi spent much of the sixth hour on the tail of leader Chiyo, unable to find a way around the GT-R to regain its lap due to the R8’s lack of straightline speed.

Handing over to Markus Winkelhok, Phoenix ace Laurens Vanthoor took to Twitter to vent his frustrations over the Balance of Performance parity.

“I never talk about BoP but this is ridiculous,” he wrote.

“I don’t want to have the quickest but a car to fight. Being a second quicker on the mountain but missing 10kmh on the straights is not correct.

“We can’t fight and race other cars.”

Order at end of six hours 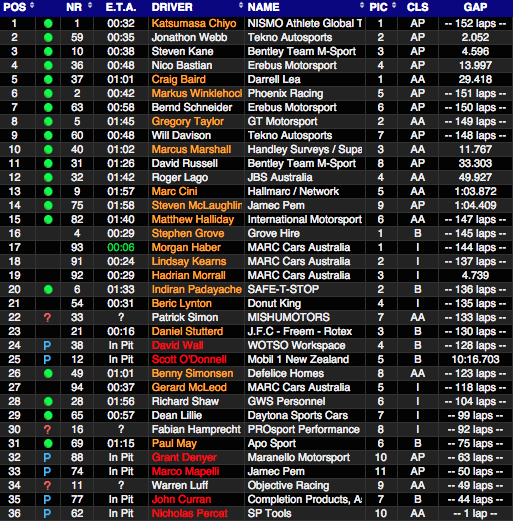