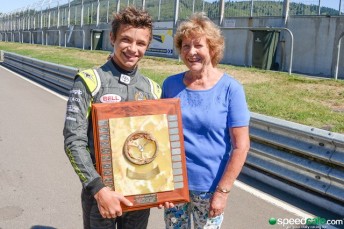 Norris completed another stunning weekend by winning the Denny Hulme Memorial Trophy and extend his lead after the penultimate round of New Zealand’s premier open wheel series.

The 16-year-old, claimed the win over Pedro Piquet with Guanyu Zhou third.

With the final round at Manfeild highlighted by the New Zealand Grand Prix next weekend, Norris has shot to an 86-point lead over Piquet.

“There’s still a lot of points up for grabs,” a cautious Norris said.

The early leader Brendon Leitch was fourth after being swamped on a restart after a lap 7 incident when Rodrigo Baptista spun.

“The flag man put out the green flag for the restart. But he didn’t wave it,” Leitch said.