Five-way fight to the finish at Bathurst 12 Hour

Five-way fight to the finish at Bathurst 12 Hour 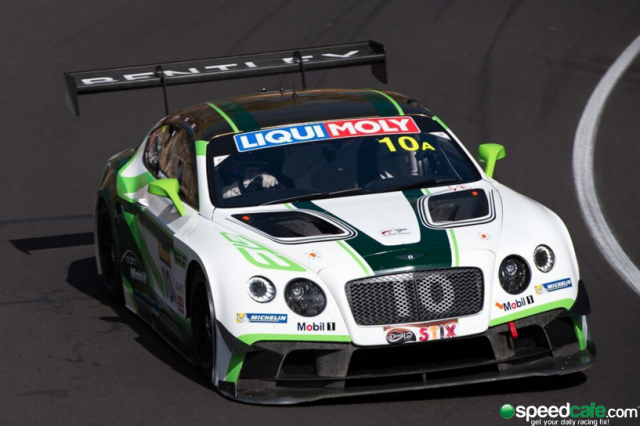 The #10 Bentley leads after nine hours

The #10 Bentley leads a five-way fight for glory in the Bathurst 12 Hour with a quarter of the race remaining.

Bentley’s Matt Bell inherited the lead at the end of the ninth hour when the race’s 10th Safety Car triggered a round of pitstops.

Florian Strauss sits second in the #1 Nissan, with Jonathon Webb (#59 Tekno McLaren) and Alex Davison (#2 Phoenix Audi) all on the lead lap.

David Reynolds is fifth in the #36 Erebus Mercedes, only dropping off the lead lap during the pitstop shuffle on the turn of the hour.

The top four cars all spent time at the head of the order during the race’s third quarter as different pit strategies unfolded around five Safety Car periods.

Both the #2 Phoenix Audi and #63 Erebus Mercedes were able to use the Safety Cars to claw their way back onto the lead lap.

The last of those yellows, however, was called to retrieve the #63 Mercedes from Griffins Bend after a front-left tyre issue pitched Austin Cindric into the tyre wall and out of the race.

“Just around the 150 metre board I lost the left-front tyre and I couldn’t do much about it,” said Cindric.

Quinn had been running in the top five when he was tagged into a spin by Roger Lago in the seventh hour.

The McLaren lost multiple laps as it became stranded on the inside kerb when he attempted to rejoin.

The top teams meanwhile continue to work their strategies to best position themselves for the end of the race.

Star drivers Steven Kane, Katsumasa Chiyo, Shane van Gisbergen and Laurens Vanthoor are all poised to jump in for the fight to the flag.

Having had a lucky escape earlier in the day, Kane is particularly eager to return to the track as Bentley attempts to avenge its narrow defeat at the hands of Nissan last year.

“I was very lucky earlier when I touched the wall and we only got a puncture,” he said.

“I have to thank everyone at Bentley for making such a strong car.

“We seem to be the fastest team in the pits which is getting us to the front.

“Fingers crossed we can be there at the end.” 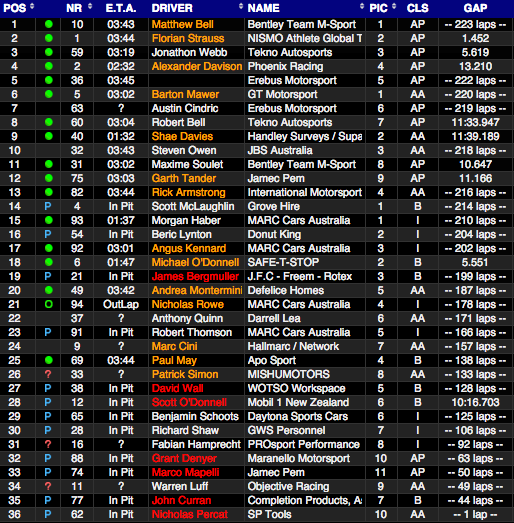