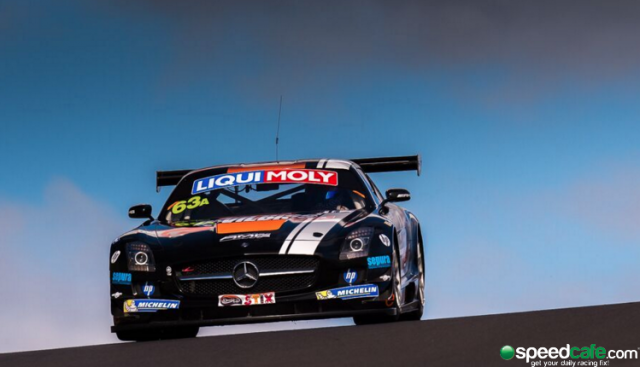 Erebus Motorsport ended up with little to show from its Bathurst 12 Hour campaign, despite extracting strong speed from its pair of ageing AMG SLSs.

Both its entries fought hard to regain lost laps during the race and were in contention heading into the final hours.

Piloted by Engel, the #63 made a strong start to the race storming from 11th on the grid to second in the first stint.

However, a broken rear diffuser with Schneider at the wheel saw the car make a couple of trips to the pits to fix the issue, falling off the lead lap in the process.

It was also caught up in a messy pit stop when the cars entered the pit bay in the wrong order. The situation was made worse when the pit boom was pulled down during the confusion.

Despite the drama, Engel eventually dragged his car back onto the lead lap to join the contenders for the victory.

Having worked hard to recover the lost ground, a front-left tyre failure shortly after Austin Cindric jumped in the car prompted an untimely retirement in the final third of the race.

“It was just a cruel sudden end to a good comeback after suffering the problem with the rear diffuser which cost us three laps,” Engel told Speedcafe.com.

“I have no doubt we would have been fighting for the win.

“Whether you win at the end of that is hard to say but we were back on the lead lap and there was a few more Safety Car periods and we had fuel in hand on the cars ahead of us.

“It’s very disappointing because all three drivers didn’t put a foot wrong all day and we had a few hiccups early on but we managed to recover with some real hard work.

“We fought our way back into it and then to stand here knowing we could have fought out the win in those last laps is disappointing, but that is racing.

“We will come back and give it another good shot next time.”

Meanwhile, the team’s sister entry driven by Reynolds, Bastian and Jaeger had looked strong until it lost a lap in the pitstop cycle at the turn of the ninth hour.

Reynolds came close to putting the car back on the lead lap but an engine issue dashed his chances of a podium.

“We felt we had a real shot at it,” Reynolds told Speedcafe.com.

“My second last stint with about four hours to go when I was trying to get my lap back I just unfortunately lost a lap.

“I got so close trying to get that lap back but I had some engine issues when I was trying to pass.

“It has this thing called ‘jerking mode’ which puts it into limp mode. This happened as I was trying to pass.

“All in all its been a brilliant weekend and I really love this race so I’d love to come back.”