Early action from the Bathurst 12 Hour

Soucek’s #31 Bentley enjoys a narrow lead over the Florian Strauss-driven Nissan, with the second Continental GT of Matt Bell third.

Pole-sitter Shane van Gisbergen dominated the early stages, driving away from the field while resetting the outright lap record to a blistering 2:01.57s.

The Kiwi’s advantage, however, disappeared during the second pitstop cycle as the Tekno McLaren team elected not to pit under Safety Car at the two hour mark.

“We still had half a tank of fuel and wanted to use the clear air,” explained Van Gisbergen.

“If the race runs green we might be in trouble but there’s a long way to go. I believe in the decision.”

Maro Engel dragged the car from 11th on the grid to second by the first stops, only to fall back again with a slow tyre change.

The first in a succession of early incidents began at Griffins Bend on the opening lap, where Mika Salo’s Maranello Ferrari was turned around by Nick Percat’s LDM Lamborghini.

Maranello subsequently dropped six laps fixing suspension damage while, with no spares, the LDM Lamborghini was out.

Typically, the two drivers had vastly different views of the incident.

“He went wide into Turn 1 and I passed him and then at Turn 2 he just hit me,” bemoaned the Finn.

“He destroyed his race, he destroyed our race in Turn 2 of a 12 Hour race. How stupid can you be? I’m so pissed off with this idiot.”

“I’m not sure if he didn’t see me, but he turned in like I wasn’t there,” countered Percat.

“I expected to run two-by-two with Salo like everyone in front of us seemed to do, but he must of had other ideas.”

The race’s first Safety Car came at the half hour mark when a right-rear tyre failure saw Gerard McLeod endure a wild spin through the gravel on the inside of the Chase.

“I think we picked up some debris from the start when we had to go wide and we had a slowly deflating tyre,” he said.

“It went bang through the chase. I thought I was Fabian Coulthard from a couple of years back in the 1000!”

There was more contact between Class A machinery later in the opening hour with David Russell barging the #31 Bentley into Rob Bell’s McLaren at The Chase.

The hit damaged the left-rear corner of the #60 McLaren, dropping it four laps down, while Russell pitted with a puncture.

“We went to the inside and he tried to make it stick around the outside and we made contact,” shrugged the Aussie afterwards.

“I don’t know if he’d warmed his tyres enough because he was struggling a bit.”

The race settled into a rhythm before a crash at The Dipper for Warren Luff at the end of the second hour required the second Safety Car.

Luff’s Objective McLaren had been Van Gisbergen’s closest rival throughout the early stages, briefly leading the Kiwi after jumping the Tekno entry in the first round of stops.

“I just made a small mistake going over Skyline and it just put me off line,” admitted Luff.

“Once we got onto the marbles the back came around and we tagged the wall.

“I’m just very sorry for all the guys here at McElrea’s and the other drivers as well.”

There was simultaneous drama for the #74 Jamec Pem Audi, which suffered race ending right-rear damage courtesy of a puncture.

“I had a little contact with the wall two or three laps before, but with the front,” said driver Marco Mapelli.

“There was no warning, no vibration (before the puncture) so I don’t know if it was the cause of the problem.”

Co-driver Chris Mies later reported that the puncture was the result of debris from Luff’s crash.

The #75 Jamec Pem Audi also had a right-rear tyre going down a short time later courtesy of contact between Steve McLaughlan and another of the R8s. 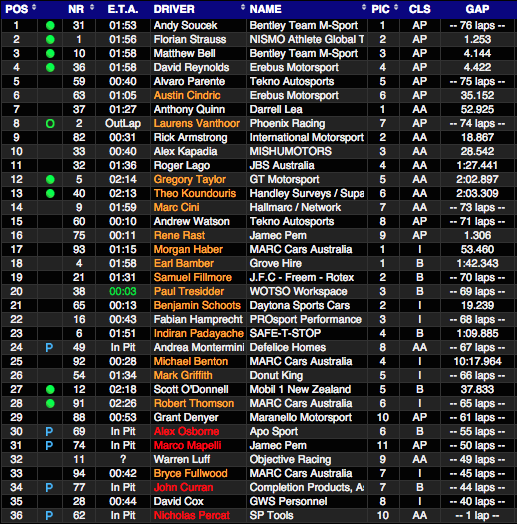 Next Story Nissan on top at halfway in Bathurst 12 Hour