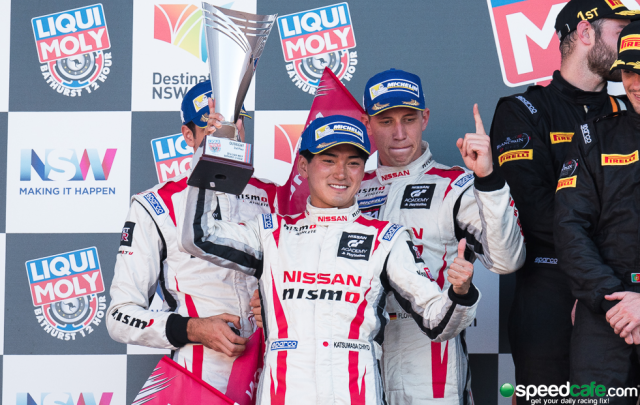 Chiyo with Rick Kelly and Florian Strauss on the podium

Although unable to repeat his winning heroics from last year, Nissan ace Katsumasa Chiyo underlined his affinity for Mount Panorama with a fighting drive in today’s Bathurst 12 Hour.

The Nissan led more laps than any other car during the day, but trailed Shane van Gisbergen’s Tekno McLaren by a seemingly insurmountable 15 seconds after the final round of stops.

Chiyo managed to cut the margin to 1.3s by the flag and, while Van Gisbergen had little reason to push in the closing stages, the Nissan’s late lap speed raised plenty of eyebrows.

The only driver to set his car’s fastest lap in the final stints when the track conditions were hot and slippery, the charge included a best of 2:02.47s on the penultimate lap.

The time was over half a second quicker than two-time Bathurst 1000 winning co-driver Rick Kelly had managed in qualifying.

Chiyo had also memorably taken second early in his final spell with a daring pass on Laurens Vanthoor’s Audi.

Crowded by the Belgian up Mountain Straight, Chiyo refused to lift at over 200km/h as the right-side wheels of the GT-R took to the grass.

“I think it was really impressive,” said Kelly of Chiyo’s drive.

“The pace at the start of the race when the track was nice and cool was very strong and I think everyone was just getting settled in.

“Through the middle part of the day the track got quite greasey and at the end there his pace was quicker than what I did in qualifying.

“It showed the car’s capability and especially Chiyo’s capability. I don’t think there would have been another hundredth in the car compared to what he got out of it there.

“I think we need to check the mirrors for paint, he was so close in a few places, which is really impressive.

“The high risk places around here Chiyo has got nailed and same with the low risk. He’s definitely got the place under control.”

Stressing a desire to win for Kelly after the V8 Supercars driver missed out last year, Chiyo has vowed to return to the mountain in 2017.

“We were not the quickest car yesterday but we can show a strong race today,” reflected the SuperGT regular.

“We are very good until the last few minutes I think, but the McLaren was so fast.

“I tried to catch up but I have some stupid moving other cars, some traffic, it was so scary.

“We really wanted to win again this year with Rick, but winning Bathurst is not so easy, we found.

“This was very like a sprint this year. Not many Safety Cars, not much traffic this year, that makes it very tough.

“I want to come back again next year.”

Kelly added that the ability for international drivers to gain experience at the Bathurst circuit in the 12 Hour could put them on the radar of V8 Supercars teams looking for Great Race co-drivers.

Nissan Motorsport has run Brit Alex Buncombe in its Pirtek Enduro Cup program for the last two seasons following his appearance in the 2014 12 Hour.

“If you look at how strong a lot of the drivers from overseas were, they come here and get the track nailed pretty quickly in these cars,” said Kelly.

“A few years ago in our V8 Supercars it wasn’t really the case.

“I think it really opens up our eyes to drivers from overseas for October.

“The quality of driver internationally is outstanding and they’ve now got experience on our track.

“They can certainly be assets to us for the future.”