Tech glitch a ‘heart in mouth’ scare for SVG

Tech glitch a ‘heart in mouth’ scare for SVG 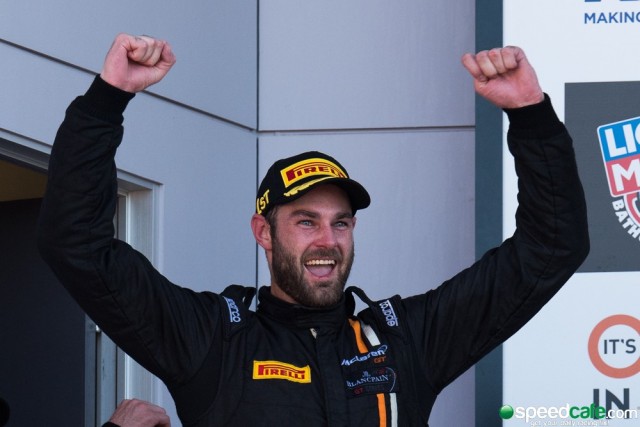 Shane van Gisbergen was relaxing in his trackside hotel room when he saw his Tekno Autosports McLaren dramatically slow to a halt in the Bathurst 12 Hour.

The eventual race winning car sat stationary on pit straight at the end of the fourth hour with co-driver Alvaro Parente at the wheel.

Seeing an engine alarm on the dash, the factory McLaren ace had elected to stop and complete a reboot of the car in order to clear the issue, rejoining the battle after a 45 second delay.

Having dominated qualifying and the early stages of the race, the moment was a heart-stopper for Van Gisbergen.

“Everything was pretty rosey when I went back to the hotel to chill out,” Van Gisbergen told Speedcafe.com.

“I was watching Alvaro going well and just saw the car stop going into the last corner.

“I had my heart in my mouth. I went to the monitor, saw the cockpit and knew there was a software error. Thankfully it re-fired and away we went.

“The only worry was if it was going to happen again, but it was alright. Every pitstop we started resetting the car and setting all the computers up again.”

Parente told Speedcafe.com that he had been confident that the reset would fix the issue.

“We get a small alarm on the car and basically the car lost about 60 horsepower, which you can feel,” he explained.

“It was lucky that it was me in the car because I know it so well and knew what to do.”

The precaution of resetting the car at subsequent pitstops, however, almost led to Van Gisbergen’s downfall when he eventually returned to the car for the final stints.

“After the reset I forgot to turn the speed limiter back on,” he said. “That was my mistake.”

When a much needed Safety Car brought them back into contention a short time later, Tekno cleverly utilised it to top up with fuel in a move that proved crucial to jumping the leading Nissan in the subsequent final stops.

“We actually weren’t going to pit but I sort of knew from V8 experience that fuel-in-hand is so important and we were at the back of the train anyway so we had nothing to lose,” said Van Gisbergen.

“I lost four positions in the train (to lapped cars) by pitting and it was a pretty good call by the team to come in then.

“I got through the train pretty quick. I got stuck behind a Bentley (#31) but we pitted as early as we could and it was a quick stop and that’s where we won the race.”

Although appearing physically drained at the end, Van Gisbergen insisted that Katsumasa Chiyo’s charging Nissan was of little concern.

Chiyo had been as much as 15 seconds behind after the last stops but drew to within 1.3s at the chequered flag.

“There was no point doing 2:02s when he was 15 seconds behind,” said Van Gisbergen.

“I could see him on the big screen coming out of the Chase when I was going across the startline. I was just managing that.

“We had plenty of pace if we were in clear air but if they were in front we were never going to pass them.”

Van Gisbergen’s blistering opening spell in the car had included a new outright lap record of 2:01.567s; a time that Parente came within hundreds of matching later in the day.

“The first stint was pretty awesome, I really enjoyed myself, but it was tough,” said Van Gisbergen.

“I’d never driven around here in the dark and we didn’t have our big lights on so I couldn’t see much.

“I had a good agreement with Garth (Tander) and Luffy (Warren Luff) in the morning and said I’ll just cruise along and after three laps start pushing when everything is up to temperature.

“It was really good, but then some Euro kid (Marco Mapelli) came along flashing his headlights and I thought ‘oh man, I’ve got to get going here’.

“I started pushing, but there were kangaroos coming out and warnings every lap. I’m a Kiwi and I’m not used to that.”