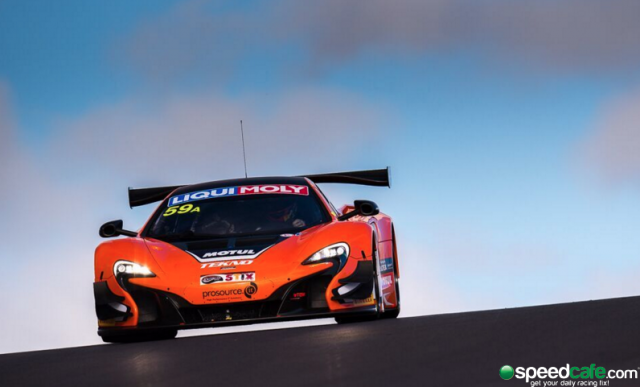 Shane van Gisbergen has scored pole position for McLaren at the Bathurst 12 Hour with a record breaking performance in qualifying.

The Kiwi set the pace with a 2:01.59s best in the first 60 minute, full field, segment to cement himself as an overwhelming pole favourite ahead of the final 20 minute run for the GT3 cars.

Jamec Pem Audi’s Rene Rast drew within 0.3s of the McLaren early in the second segment, only for Van Gisbergen to immediately lower the benchmark to an untouchable 2:01.29s.

“It was amazing,” beamed Van Gisbergen after earning the Allan Simonsen Pole Position Trophy for his efforts.

“I’ve never been close to that fast around here before.”

Warren Luff proved the top Australian in third aboard the Objective McLaren, joining the top two in the 2:01s bracket.

Luff was the top Michelin runner in a session that saw Pirelli shod entries otherwise dominate the top six.

Christopher Mies made it two Jamec Pem Audis in the top four while Will Davison improved on his final lap to lift the second Tekno McLaren into fifth.

The Keltic McLaren will start sixth courtesy of a time set by Craig Baird late in the opening segment, before electing to sit out the second hit-out.

Co-driver Klark Quinn had starred in the opening phase of the first session, running a 2:02.7s to set the early pace.

The first session was red flagged almost immediately after it started, with Benny Simonsen escaping a wild spin at Reid Park in the Vicious Rumour Ferrari.

A second stoppage was required in the final minutes, this time to retrieve the #77 Team NZ Porsche after it was crashed by Kiwi Will Bamber.