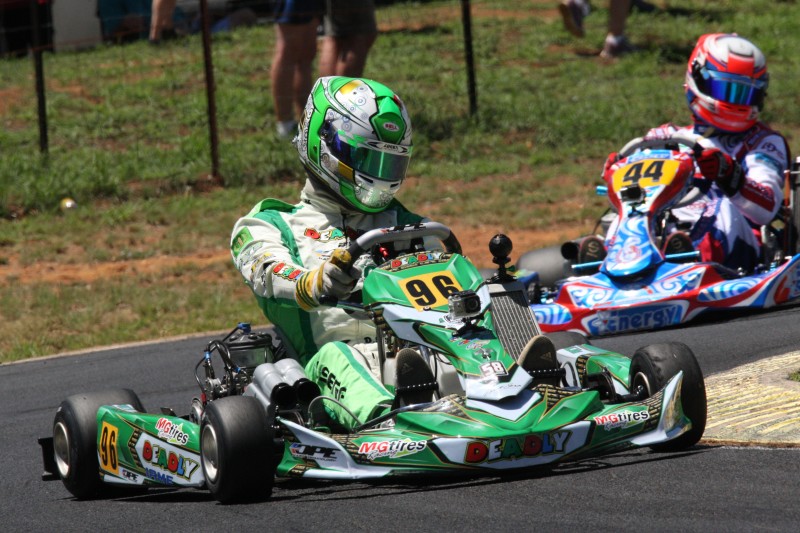 Following 12 months out of Australian Kart Championship competition with a wrist injury, a rejuvenated David Sera has led the charge in his return today, setting pole and winning both KZ2 races in Dubbo.

The 17-time Australian Champion admitted some off-season changes and some observations during his racing return in October on the Gold Coast had paid dividends to his strong start to the Jayco and Castrol EDGE supported series, particularly a revised ‘Deadly’ Kart – the chassis developed in his honour by DPE Kart Technology.

“We came here with a re-designed kart and a new engine on board,” said Victorian, Sera. “From when we rolled out in first practice, it felt good and the powerband was right there with some of the guys that were up the front last year, so I was confident coming into qualifying and the heat races.”

He had strong battles with a couple of surprise packets – South Aussies Jonathon Mangos and Daniel Price – both of whom were right up the front from the get-go, so too Chris Hays – who has jumped to BirelART in 2016.

Jack Doohan, the son of five time MotoGP World Champion, Mick Doohan was in the mix from the start in KA2 – the elite Junior category. After his fellow Gold Coaster, Lachlan Hughes took a surprise pole position, Doohan took the first race win.

He recovered from being as low as 10th in the second race to finish fourth to Broc Feeney, before he finished a narrow third in the final race behind Victorian Dylan Hollis.

In other action, current Australian X30 Champion, Daniel Rochford continued his good form, taking all three races in that category. The same could be said for Reece Sidebottom who won both KA1 Senior heats on debut, Travis Wharton who won the KA4 Junior races after a strong fight and Emerald (Qld) racer, Carter Mobbs won all three Cadet 9 races.

Cadet 12 was a highlight of the day with CRG drivers Adrian Haak and Kai Allen sharing the victories. In the final race for them this afternoon, Allen won by 0.001 from his Shamick Racing team-mate, James Wharton. So tight was the finish, it couldn’t be picked by the naked eye.

Tomorrow, third heats for KA1 and KZ2 Gearbox will be conducted in the morning, before fourth heats for all classes and the finals.

Livestream of all races will be displayed on karting.net.au from 8:30am AEDST.