The M Motorsport Lamborghini has been withdrawn

M Motorsport’s Interlloy Lamborghini has been officially withdrawn from the Bathurst 12 Hour following a crash in final practice.

The #48 Gallardo suffered heavy rear-end damage when Kiwi John McIntyre spun on the entry to Hell Corner and made contact with the outside wall.

“It was my second lap on greens and I was still warming them up on the front straight,” McIntyre told Speedcafe.com.

“It just pinched the rears and there’s no coming back in these things when they start to come around.

“The front wheels came up when it hit the inside kerbing and unfortunately with the flat floor on these cars it just skipped straight across the gravel trap.

“If it didn’t have a floor in it, like a V8, it probably would have stopped (before the wall).

“I didn’t feel it was that bad a hit, but obviously the cars are aluminium at the back and there’s just too much damage for the guys to fix here.”

Despite not having driven the car until yesterday, McIntyre said he had felt comfortable behind the wheel prior to the accident.

“The fuel was getting lighter and on the second set of greens we were hoping to get into the 2:03s.

“But it was just a matter of getting caught out with what these things are like in the rear on cold tyres.” 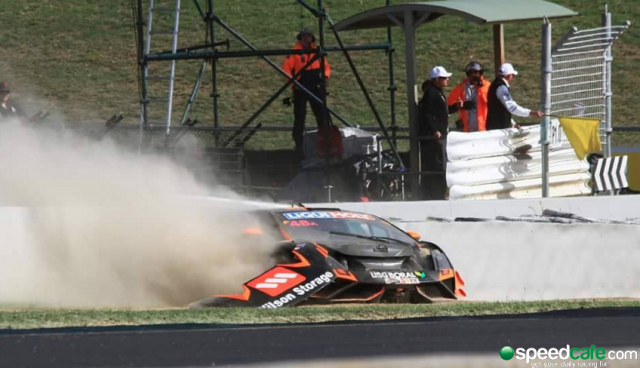