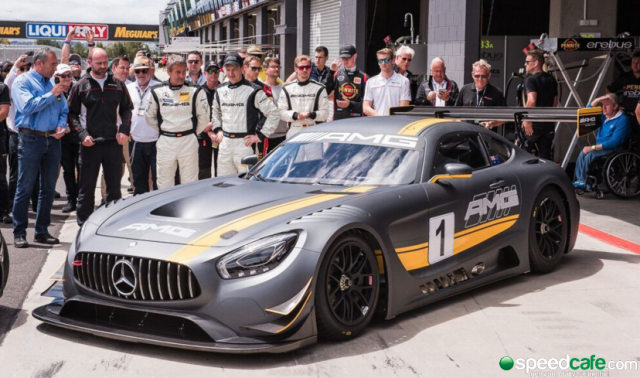 The team’s first car has already arrived in Australia, with AMG Customer Sports chief Jochen Bitzer on hand for an unveil in front of media and corporate guests at the Bathurst 12 Hour today.

AMG’s GT replaces its iconic SLS, which has underpinned the Mercedes-Benz brand’s involvement in GT3 racing over the last five years.

Hackett and 26-year-old Kiwi Dominic Storey have been confirmed as drivers for the team, which will debut with at least one entry at the Clipsal 500 Adelaide season opener.

The cars will be run alongside Eggleston’s existing Dunlop Series and Kumho Series entries from the squad’s Melbourne workshop.

It marks a return to GT racing for the husband and wife team of Ben Eggleston and Rachael Wagg.

Ben raced in the class as recently as 2014, while Rachael co-owned and managed the championship from 2005-2011.

“We are still doing the Dunlop and Kumho Series programs, but we want to broaden our horizons a bit with GTs,” Rachael Eggleston told Speedcafe.com.

“We’ve had great success winning three titles (one Dunlop and two Kumho) in the last two years and I can’t wait to see what we can do with the new AMG GT.”

Hackett, who is the chief driving instructor for Mercedes-Benz in Australia, has done limited racing since splitting with Erebus’ GT program in early 2013.

“We’ve linked in with some incredibly professional people and the last few details are being sorted with AMG Customer Sports right now.

“We’re certainly going to be ready for Clipsal with one car and we just need to confirm the delivery date on the second.”

AMG Customer Sports staff attending this week’s 12 Hour are expected to complete an official handover of the first car to the team this week, which will include its first track test.

Erebus Motorsport has also taken delivery of its first AMG GT, which is in the team’s transporter at Bathurst and will likewise have its first run in the coming days.

Like Hackett, Erebus is also awaiting the imminent arrival of a second car, both of which will be run for customers.

“We have two cars here already and two more are coming in a few days,” Bitzer confirmed to Speedcafe.com of the new GT.

“This is the start for hopefully another successful era for AMG GT3 cars in Australia.”

Erebus is running its two SLSs with support from AMG Customer Sports at Bathurst this weekend, including the presence of four factory drivers, led by Bernd Schneider.