Bathurst 12 Hour ‘all about the tyre war’ 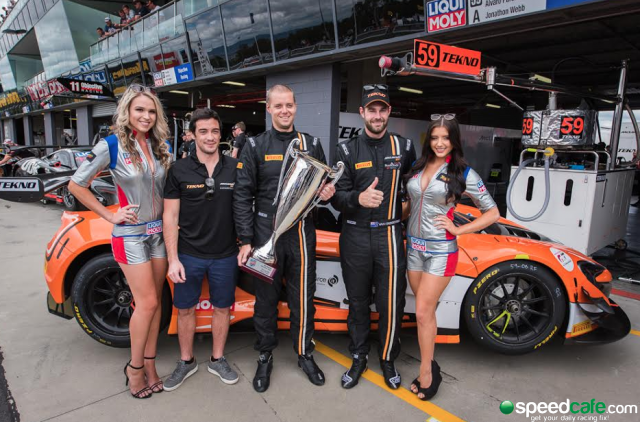 Bathurst 12 Hour pole-sitter Shane van Gisbergen expects the tyre war between Pirelli and Michelin to play a critical role in the result of Sunday’s race.

Van Gisbergen put the Tekno McLaren he’ll share with Jonathon Webb and Alvaro Parente on pole with a stunning 2:01.28s lap, more than 0.5s clear of his nearest rival.

After scoring pole, Van Gisbergen confirmed his confidence in the McLaren over a race distance but, with the cars closely matched under the Balance of Performance rules, warns the tyres are the biggest wildcard.

While the Pirellis led the way on a cool track in qualifying trim today, Van Gisbergen says that his car might struggle over extended stints if similar conditions are experienced during the race.

Adding to the equation is that teams have multiple compounds to choose from as they balance outright speed and the ability to double or even triple stint.

“Really the race is going to be about the tyre war between Michelin and Pirelli,” Van Gisbergen told Speedcafe.com.

“The Michelin will be better in the morning when it’s cold, but once the temp comes up the Pirelli comes into its own.

“We have good durability with the tyre so I think we’ll be ok, but we’ll see.”

The highly fancied Phoenix Audi was among the Michelin runners to notably struggle for one-lap pace; an issue co-driver Alex Davison hopes will not continue over full stints.

“It’s been a bit of struggle to get the tyre working properly,” he told Speedcafe.com.

“It seems as though the Pirelli is quite a step forward over a lap in the cooler conditions.

“Our hope is that our Michelin tyres will work better over a longer stint and as the temperature rises.”

Van Gisbergen meanwhile set the pace in both segments of qualifying, shaving 0.3s from his initial 2:01.59s in the final 20 minute session.

“For me I knew that after Q1 I had some time left because I mucked up the last corner,” he said

“The second lap was probably about it. The track had cleaned up a bit.

“You’d always like to think there was more in it, but there probably wasn’t.”

The Kiwi says that the GT3 cars, which are developed by the manufacturers to suit amateur drivers, are ‘easier’ to drive on the limit than a V8 Supercar.

“Things happen a lot easier than it does in the V8,” he said.

“Corners like that are easy but over the top you’ve just got to push and hang on. Down the hill is crazy.

“Those kind of high speed corners you’ve got to have some balls, but low speed the car does it for you.”

Rast improved his own best time by 0.5s in the final qualifying segment, but had to admit defeat after seeing Van Gisbergen’s own improvement.

“I was trying to improve the lap time and I did, but Shane improved by the same amount so after that I knew I wasn’t going to go another 0.5s quicker.

“I tried another run but the tyre was gone.”

Rast admitted to a wild moment at the top of the hill on his very last attempt.

“That is when I said ‘this is it, I’m not trying to destroy the car’ so I went back to the pits.”

Next Story Maranello banking on strategy for Bathurst bid