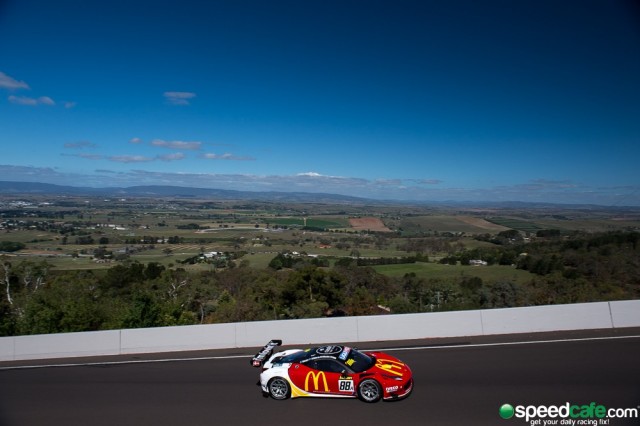 Maranello Motorsport remains unconcerned by the lack of outright pace shown by Ferrari at Mount Panorama as it bids for a second Bathurst 12 Hour victory.

The 2014 winners have not threatened the top of the time sheets throughout practice and qualifying with the team focussing on strategy rather than speed to conquer the Mount Panorama classic.

Piloted by Mika Salo, Toni Vilander, Tony D’Alberto and Grant Denyer, the squad’s best lap of 2:03.658s set in qualifying was 2.3s adrift of the pace.

The time, recorded by Vilander, would have seen them secure fourth on the grid 12 months ago.

However, this year has seen lap times tumble at the mountain with Tekno McLaren’s Shane van Gisbergen lowering the fastest officially recorded lap to 2:01.28s.

Last year the Melbourne operation were unable to defend its Bathurst crown after being eliminated from the event following a crash in Friday practice.

“It is easy for a lot people to look at the time sheets and think the Ferraris are not quick but I don’t think that is important,” Coffey told Speedcafe.com.

“It is all about strategy and having a plan.

“We know people will dip into the 2:02s and 2:01s but it will be interesting to see what the rest can do to maintain a race pace to conserve tyres and fuel.

“We have got a car that is very efficient on fuel the guys are very quick in the lane so its all going to be about conserving fuel and managing tyres properly and staying out of trouble.”

Ferrari GT specialist Vilander admits there is shortfall in pace compared to the front runners but refuses to write off the teams chances.

“We have a quite good race car and all four drivers are up to a good speed so it will be down to strategy,” Vilander told Speedcafe.com.

“If we can avoid incidents and penalties we will see where we are at for the last stint and see what we can accomplish.

“It is a bit different to last few years. The car has always been competitive and fighting for the lead so this year we will see.

“The pure speed is not our strength so hopefully the race is. We have a really strong pit wall and engineers.”

Previous Story Bathurst 12 Hour 'all about the tyre war'