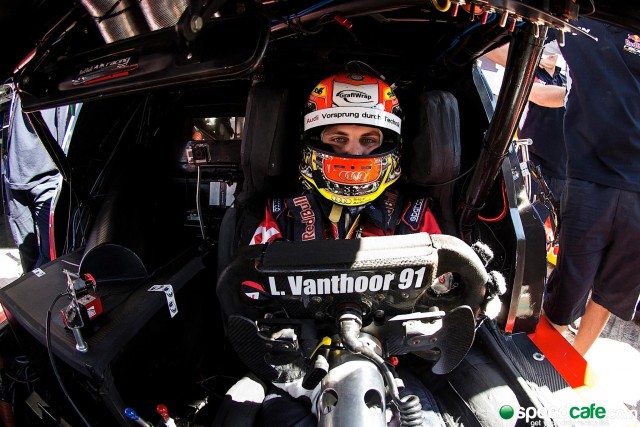 Laurens Vanthoor remains confident he will be able to push for a coveted Bathurst 12 Hour victory despite feeling the effects of a fractured hip sustained last year.

The 24-year-old Belgian was forced to sit out the remaining two rounds of the Blancpain GT Series and the Macau GT World Cup when he suffered a horrific crash at Misano in October.

Three and half months on from the crash Vanthoor’s recovery from a fractured leg and hip continues, with the factory Audi driver rating his fitness at 95 percent ahead of opening practice.

Vanthoor has made a successful competitive racing return winning both the Sepang 12 Hours in December and the Dubai 24 Hours last month.

Despite suffering from back pain in Dubai the former Blancpain GT champion is adamant he will be in good shape to challenge for victory this weekend, alongside Markus Winkelhock and Australian Alex Davison in the Phoenix Audi.

“I think my physical condition is better than what it was before the accident,” Vanthoor told Speedcafe.com.

“(But) I still have some issues now and then with my hip.

“It has only been three and a half months, it is not a lot of time ago.

“If you have a fracture it takes time for your body to adapt to be 100 percent.

“I still have some back pain and some pain in some muscles now and then.

“In Dubai I had some back pain because everything has had a shock. Everything has moved a bit so the body needs to adapt and that takes some months.

“The worst part (of the recovery) has past but there are some small details which are not 100 percent good.

Vanthoor emerged as one of the stars of the 2015 Bathurst 12 Hour after posting a 2:02.5521s to claim the qualifying lap record on his way to pole position.

The race is the only GT3 endurance event he has entered that he hasn’t conquered, having tasted victory in the Spa 24 Hours, Nurburgring 24 Hours, Sepang 12 Hours, Dubai 24 Hours and Zolder 24 Hours.

The Belgian was the runner-up at last year’s Bathurst 12 Hour with Phoenix Racing having dominated large parts of the race.

Armed with the new improved Audi R8, he is confident his team including the addition of Davison will be able to add the race to his glittering resume.

“Last year we were close to the win. We fought for it for a long time but we lost out so I think the goal for this year is clear,” added Vanthoor.

“The new car will surely help with some of the problems that saw us lose last year. There is seven years of difference between the two models.

“Everything that was wrong on the old car has been modified and developed for this one.

“It is something that I would be really proud of (winning this race) because I just love to race on this track. It is one of those proper tracks where drivers can make a difference.

“Alex (Davison) doesn’t have the experience in the car but I think it is more important to know the track. I think he will be very good.”

Opening practice for the Liqui-Moly Bathurst 12 Hour begins at 8:20am local time.