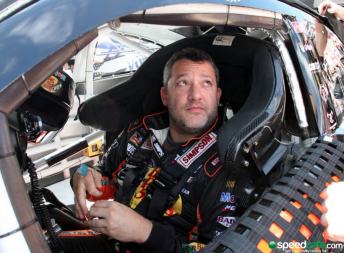 Stewart was injured in an all-terrain vehicle accident on Sunday while on vacation on the West Coast of the United States.

A statement from Stewart-Haas Racing today has confirmed a burst fracture to Stewart’s L1 vertebra, on which he has already undergone surgery.

“Stewart flew to North Carolina Tuesday evening and was admitted to a Charlotte-area hospital for further evaluation. On Wednesday, he underwent surgery,” read the statement.

“The subsequent recovery period means Stewart will miss the beginning of the Sprint Cup season.

“A timetable for Stewart’s return has not been determined, but he is expected to make a full recovery and return to the No. 14 Chevrolet in 2016.

“Plans for an interim driver have not been finalised.”

A three-time NASCAR Sprint Cup champion, Stewart remains winless in 17 starts in the Daytona 500, which opens the season on February 21.

Stewart has however won a total of 19 races at the famous speedway, including Daytona 500 qualifying heats, the Sprint Unlimited exhibition and the International Race of Champions.