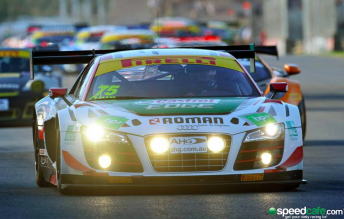 Steve Johnson is hoping to revive his career with a GT drive.

Steven Johnson continues to knock on doors as he tries to revive his career in the flourishing GT racing scene.

Sweeping the pitlane at the Bathurst 12 Hour, Johnson is clutching hope of securing a drive in a GT3 car this year.

After opening up lines of communication with Bentley’s M-Sport factory team as well as Audi factory operations, Johnson says his Silver rating in GT should prove a valuable asset.

Johnson is a three-time race winner in V8 Supercars and competed in the Bathurst 1000 consecutively from 1994 to 2013.

“I’ve talked to a lot of people. I know once I get my bum in a seat it will open up a lot more doors too,” Johnson told Speedcafe.com.

“Even though I’m not racing here this weekend I just want to show people that I’m still around and hungry for a drive.

“I’m working on the Audi R8 road car launch on Monday at Mount Panorama so I was going to be here anyway.

“You’ve just got to be here to see everybody whether it be in the Australian GT enduro series or whatever.

“I’d love to do the whole Australian GT series, both the sprint and endurance.

“I’m still looking at doing some TCM (Touring Car Masters) stuff this year but I’m looking at GT both here and overseas.

“I went to Spa last year just feeling out the pitlane for opportunities.

“I’d like to do that again this year, but cement a drive before going over for maybe the Spa 24 Hour or some Blancpain Series races like SVG (Shane van Gisbergen) did last year.”

While the chances of gaining an 11th drive drive this weekend remains extremely remote, Johnson is prepared for any last minute scenario.

“Obviously there was a bit of shuffling with the late changes to driver ratings for this race, hence the reason why I’m here a bit earlier. You never know what might happen,” he said.

Johnson did the first couple of Australian GT rounds last year for the Jamec-Pem Audi team which showed the way in Practice 2, filling the first two places as preparations continue for Sunday’s blockbuster 12 Hour.