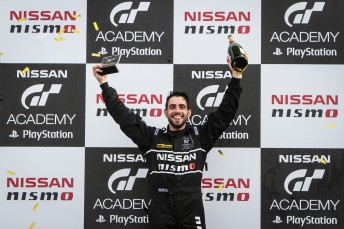 Australia’s new GT hope Matt Simmons will use this weekend’s Bathurst 12 Hour to aid his preparations for his Blancpain GT Series debut in 2016.

The Queenslander is the latest product from Nissan’s renowned GT Academy scheme which transforms gamers into professional racing drivers.

Simmons, a former postal worker from Brisbane, fought off a selection of the world’s best gamers to land a coveted professional contract with Nissan.

The 26-year-old will join Nissan for its Blancpain Endurance Series assault, behind the wheel of a GT-R GT3.

Facing the giant leap from gamer to Nissan Blancpain GT driver, Simmons will join up with the Nissan squad at Bathurst as an avid onlooker aiming to soak up as much information as possible to aid his transition.

“It is going to be exciting and it is great to be a part of the biggest race in Australia for GT3 cars,” Simmons told Speedcafe.com.

“I went to Bathurst five years ago to watch the V8s but I never thought I would be going back there to be a part of a race team.

“The biggest reason why I am going to be there is to learn as much from drivers and the team as I can.

“You can really get an understanding of what they have to go through during a race weekend. It is going to be great to just listen to feedback from the drivers and see what I can take from that going into the Blancpain GT Series.”

Eager to begin his professional racing career with the Blancpain GT opener at Monza in April, Simmons admits his excitement is tinged with nerves as he prepares to take on GT’s elite.

“It’s a double edged sword I am excited to be out there and doing this but nervous about how I’m going to perform,” Simmons added.

“However I have learned so much from this program and you don’t really realise how much you have learnt until you are in situations again.

“I have no doubt there will be times where I will reflect back on the program at events this year and get myself through it.”