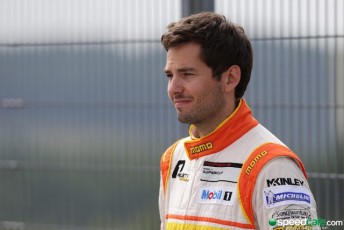 Brake failure caused the fiery crash which resulted in the death of Sean Edwards at Queensland Raceway in 2013, the coroner has found

British Porsche racer Sean Edwards’ death at Queensland Raceway in 2013 was the result of brake failure, a coronial inquest has found.

Queensland’s deputy state coroner John Lock today handed down the findings of the fiery crash which claimed the life of the racer who had been in the passenger seat while coaching young driver Will Holzheimer.

The coroner found that there was an unknown mechanical failure rather than simply worn out brake pads which came to light at the inquest in Brisbane late last year.

Holzheimer suffered horrific injuries but survived the crash when the Porsche left the circuit and ploughed into the barriers head-on at Turn 6 in October 2013.

The 996 GT3 car hit a tyre barrier and concrete wall at an estimated 145km/h and caught fire.

“(The) crash was caused by an unknown mechanical failure. (The brakes) totally failed,” he said, noting there was nothing either passenger Edwards nor driver Will Holzheimer could have done to stop the car leaving the track.

Among the findings into the tragedy which claimed the life of the 26-year-old Edwards saw recommendations for guidelines to be developed for driver coaching.

*Appropriate motor sports regulatory bodies including CAMS and similar organisations should work together to develop guidelines for driver coaching and recreational activities conducted on race tracks in Queensland, such that individuals who provide venues for, organise and participate in these activities are appropriately informed about the risks involved and how to make these activities as safe as possible.

* Information about this incident be provided to Porsche (if this has not occurred already) so that the company can satisfy itself as to whether this was a one-off incident, or whether there may be any design or manufacturing faults with this particular vehicle.

In response to the findings Confederation of Australian Motor Sport (CAMS) Chief Executive Officer Eugene Arocca said the body was in the process of reviewing the recommendations.

“CAMS has received the findings and recommendations from the Coroner and is in the process of reviewing them, Arocca said.

“We will continue to work with all relevant stakeholders including venues, event organisers, drivers and officials in an effort to improve safety in motor sport.”

Edwards was on the verge of winning the European based Porsche Supercup title at the time of his death.

He had also played a stunt role in the hit movie Rush centred on the epic Formula 1 World Championship season in 1976 when James Hunt narrowly beat Niki Lauda.

Lauda had come close to death when he was involved in a horrific fireball during the German Grand Prix at the Nurburgring.