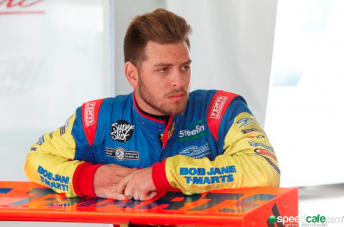 The 23-year-old has been added to the line-up in the #77 Team NZ Motorsport Porsche after a leg injury forced team co-owner Graeme Dowsett to stand down from driving duties.

Although made aware of Dowsett’s injury earlier in the week, Foster says the driver change was not confirmed until this morning.

“I was coming down to give these guys a hand anyway to help the guys learn the circuit and spin some spanners for them,” Foster told Speedcafe.com.

“It’s good to be in a car, but it’s not the best of circumstances. It’s a real shame for Graeme to miss out, but he just wasn’t up to driving.

“This will be my first 12 Hour race, so I’m in the deep end a little bit trying to help the guys run the team, drive and coach all at the same time, but hopefully we can have a good run.” 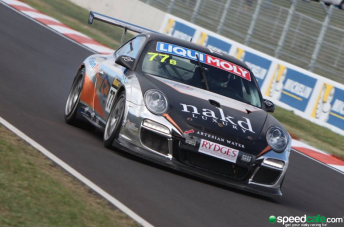 The Team NZ Porsche at Bathurst

Team NZ is a Singapore-registered outfit that has added Bathurst to its Thailand Super Series and Sepang 12 Hours commitments this season.

Foster says he won’t get behind the wheel until tomorrow as the squad aims to give its three Bathurst rookies maximum practice laps.

The team’s campaign endured a bumpy start in morning practice, where a gearbox seal issue sent the car to the garage after just two laps.

Foster meanwhile hopes to use Bathurst as a springboard to more GT endurance races this year.

Electing not to return to the Carrera Cup, Foster is currently without any confirmed top level drives for 2016.

“There’s lots of talking, but we’ll wait and see,” he said of his year.

“Ideally I’d like to place myself in a GT car, either here or overseas, but what happens from here I’m not sure.

“It was great to tick the Carrera Cup box last year so hopefully we can move onto something a bit bigger.”

Foster is adamant that GT racing is where his future lies, electing not to pursue a V8 Supercars career.

“I’m interested in enduro seats, but I don’t see myself ever trying to become a full-time driver, doing DVS (Dunlop Series) and then going into the main series,” he said.

“The guys that make it there are doing three or four years of DVS, which is a lot of money, and then they still have to pay to get in.

“I don’t have that kind of support behind me, so in the long run I don’t see it as something that’s viable.”