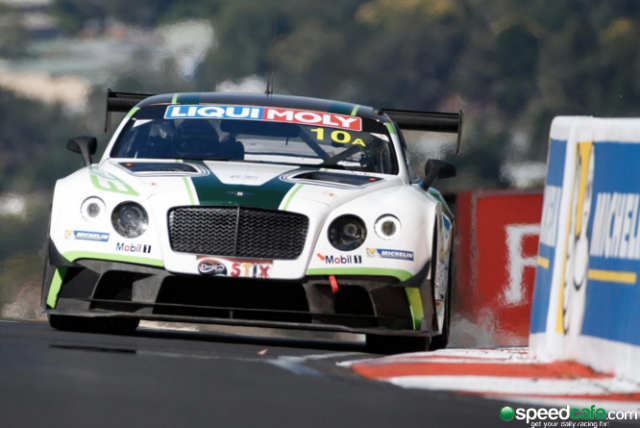 Kane clocked the fastest time in the Bentley

Kane shot to the top of the order with little over 10 of the 90 minutes remaining, completing the fastest time of the day in 2:03.23s.

The lap proved just 0.07s quicker than that managed by Will Davison in the #60 Tekno McLaren earlier in the session.

On a day where few of the top runners were expected to show their true pace, Kane admitted that his time was pretty close to the car’s ultimate pace.

“We were very low on fuel so everything was at the optimum pace in the car,” he said, having proven two seconds quicker than the best Practice 4 time from last year.

“I think everyone is hiding a little bit. (But for us) there might be a little bit, but not much more than that.”

The Bentley team, which runs Pirellis in Europe, spent the day readjusting to the Michelin tyres that the majority of the field are running at Bathurst.

“We started off with last year’s set-up and have tried to evolve it a little bit.

“We’re trying to anticipate what is going to happen in the race when the track has gripped up.”

The session included two red flags, the first coming little over half an hour in when Shane van Gisbergen spun the #59 Tekno McLaren into the gravel at The Chase.

Van Gisbergen had been attempting to pass the race’s slowest entry, the #28 GWS Personnel BMW 335i, at the time of the miscue.

While the McLaren was towed out and resumed, the second red flag required a flatbed for the #38 Wall Racing Porsche.

The car received rear damage when it made contact with the wall at The Cutting with Paul Tressider at the wheel.