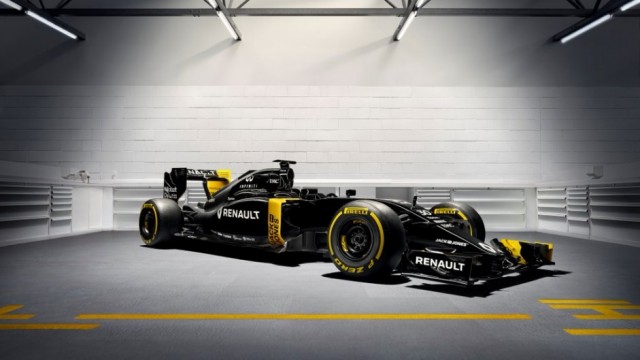 Renault has taken the covers off its new Formula 1 car while confirming that Kevin Magnussen will replace Pastor Maldonado for the 2016 season.

The French manufacturer, who took over the Lotus F1 operation last year, announced its F1 plans at launch in Paris where it also revealed the name and structure of its F1 squad.

Having been involved in F1 for 40 years, Renault will return as a full manufacturer effort under the Renault Sport Formula 1 team banner, with its newly constructed RS16 challenger, featuring a black and yellow livery.

Renault CEO Carlos Ghosn has set a goal of scoring podiums within three years as it returns to the sport as a full factory effort for the first time since 2011.

The 2016 challenger features branding from luxury car manufacturer Inifinti who will be involved in a joint technology development program with the team.

The RS16 will be driven by 2014 GP2 champion Jolyon Palmer and Magnussen, with last year’s GP3 champion Esteban Ocon unveiled as the reserve driver.

The move will see Magnussen return to the category on a full-time basis after losing his race seat at McLaren at the end of 2014.

Cyril Abiteboul has been confirmed as managing director, Fred Vasseur will act as racing director with the experienced Bob Bell named as F1 chief technical officer.

Renault has featured in F1 since 1977 where it has won 12 constructors’ championships, 11 drivers’ titles and 168 races.