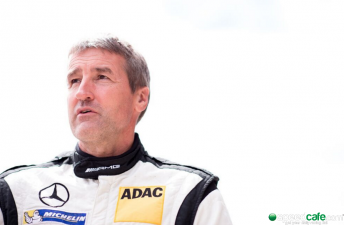 The 51-year-old joined Erebus’ winning effort in his first appearance at the event in 2013, before a mechanical issue halted a dominant run a year later.

This year he rejoins Erebus to share one of the team’s two SLSs alongside countryman Maro Engel and American young gun Austin Cindric.

SPEEDCAFE: Bernd, you’ve done everything there is to do in these cars over the last few years. What’s the motivation to come back down and race here again?

BERND SCHNEIDER: Honestly Bathurst is one of the most interesting race tracks I know and it’s always good to race on such a nice track.

I was here in July with our AMG GT S (road car) presentation and it was really great to run here again.

When I got the chance to come back with Erebus I really appreciated it and am looking forward to doing the 12 Hours again.

SPEEDCAFE: When you were here in July it looked a bit wild. I don’t think we’ll be seeing any snow this weekend…

SCHNEIDER: It was different. I didn’t expect it to be so cold. 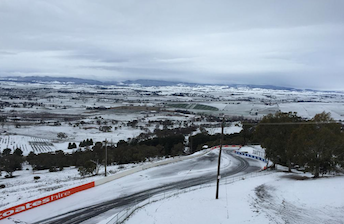 I watched the weather forecast and saw it was 10 degrees, which is normal, but then came here and there was snow on the mountain.

It was unbelievable really. I didn’t believe you could have snow here.

I also tried to break the lap record for road cars (during the week) but it was very difficult to get tyre temperature.

It was only zero or one degree during the day, so it was not so easy and we missed it by one second.

It’s a good race track and I love to come back here. It’s like the Nurburgring 24 Hours. It’s a special event and it’s great that we get the chance to come and do it.

I’d enjoy it even more if we could have our new GT here. It’s a shame that we don’t have the chance, but maybe next year.

SPEEDCAFE: Do you think you are a realistic chance of winning the race with the SLS?

SCHNEIDER: Honestly we have to say that the SLS is now five years old and is pretty much the same car from the first moment.

It will not be easy because Audi is here with their new car. There are new McLarens and Bentleys, they are all new.

The reliability of our car is really good and the power should be ok, but I’m not sure about the weight because ours is the heaviest in the field, so the brakes and tyres suffer more than others.

But the new surface maybe helps us a bit because it doesn’t hurt the tyres so much. We will see how it goes. 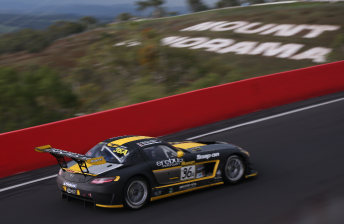 Schneider on the way to victory at Bathurst in 2013

SPEEDCAFE: Do you feel there is any clear favourite in the field?

SCHNEIDER: There are 10 or 12 cars that are able to win the race.

There are a lot that have strong driver line-ups, including ours I think.

At the moment anything can happen.

SPEEDCAFE: Outside of Bathurst and the Nurburgring 24 Hours, what does your racing schedule look like this year?

SCHNEIDER: It’s not 100 percent settled right now because it’s early in the season, but I think there will be another few races like Spa 24 Hours and Sepang (12 Hours).

I might do Blancpain too, we are still talking to teams about that. If I can support them I will be there, but there is nothing fixed.

SPEEDCAFE: Are you planning to come back to these sorts of races for a few more years yet?

SCHNEIDER: I don’t think it’s a few more years, but definitely this year.

You never know (about next year). Maybe it would be good to come to Bathurst with the GT, but we will decide at the end of the season.

If I still feel fit enough and am still fast enough I will keep coming back to do it. 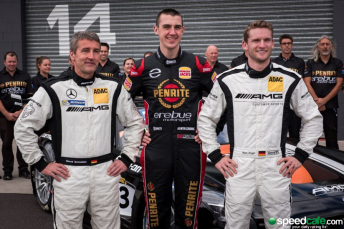 Schneider with Cindric and Engel in the Bathurst pitlane

SPEEDCAFE: This is your third appearance here. What do you think of the growth of the race in that time? Is it gaining traction in Europe?

But even if you only have 10 cars on the grid, if they are really competitive it’s a big fight to win.

At Nurburgring and Spa you have more potential race cars on the grid. Spa for me last year was absolutely outstanding with more than 60 cars.

There were so many manufacturer cars there, it was a really tough race.

I think Bathurst, Spa and Nurburgring are pretty much along the same lines.

Every driver wants to come to Bathurst and do the race. They know it’s a special race track.

I hope it continues to grow because there’s always good racing here. In the future I hope some more European teams will come to join the race.

SPEEDCAFE: Is there any one part of this track that, having now been here a few times, you’re still trying to do better?

SCHNEIDER: Well, going across the Mountain and Skyline, it’s really fast over there and if you make a little mistake it costs a lot of money.

It’s always a big challenge in those parts, every lap.

Down at the pitlane and start-finish, it looks like a normal race track, but everything from the second corner onwards is really challenging.

It’s really close to the walls and it’s third and fourth gear. It’s really fast. If the car is good, if you have a good set-up, it’s very, very enjoyable.