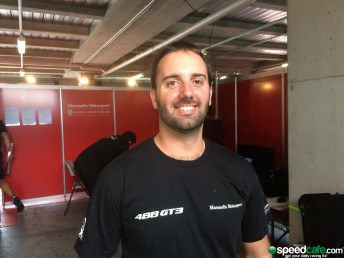 McPherson, who will engineer Shane van Gisbergen in this year’s V8 Supercars Championship, has joined the Ferrari operation to offer his tactical expertise as the squad bids to record a second triumph in the Mount Panorama GT classic.

This is not the first time Maranello has sought extra engineering personnel for the event. Former Triple Eight V8 engineer Jeromy Moore played a key role with the squad en route to victory with Craig Lowndes in 2014.

Switching his attention away from V8 Supercars, McPherson is looking forward to sharing his knowledge with the #88 entry piloted by Mika Salo, Toni Vilander, Tony D’Alberto and Grant Denyer.

Although new to the team, the former Prodrive Racing Australia engineer has previously worked with Salo in V8 endurance races on the Gold Coast in 2011 and 2012.

“The main focus is Sunday’s race and managing all the race strategies,” McPherson told Speedcafe.com, having won the Bathurst 1000 last year with Lowndes and Steven Richards.

“It is quite different. Every time I have come here it is 161 laps. This is a bit different and managing driving time will be a lot more of a factor.

“There are lots of variables to adapt to but it is always exciting to do something different.”

With the quality of the competition growing year-on-year, Maranello boss Mark Coffey believes expanding its resources is crucial to compete for the race victory.

“The bar has gotten higher every year,” Coffey told Speedcafe.com.

“We have got to put more into it like dedicated tacticians and more engineers. The landscape changes every year.

“Grant has done a lot of 1000s here and is a proven quantity. We don’t do a lot of endurance racing, not long hauls like this.

“Grant knows the place and local knowledge is a huge advantage.”

Heading into the race Coffey is happy with his line-up despite being forced into a late driver change with Denyer replacing Scott Pye due to a change in the FIA driver seedings.

However, the team is keen to banish the memory of last year when its Bathurst 12 Hour defence ended abruptly following a heavy crash in Friday practice, which rendered the car unrepairable.

“We have got some briefs in place to avoid those sort of things,” added Coffey.

“We have got to play a bit more of a waiting game and let the traffic come to us.

“We have to understand that Salo and Vilander live in these things so we need them let them do some of the heavy lifting.

“At the end of the day I don’t think it is about raw race all the day it is all about timing and planning and knowing when to push.

“We will push when we have too. The most important thing is being on the lead lap and having a good car with Vilander or Salo in at the end for the final push.”

D’Alberto, who was behind the wheel when the event ending crash occurred, says his approach to the race is unchanged although he admits the moment will be in the back of his mind.

“I’m very thankful for Maranello for giving me another opportunity after last year didn’t pan out how we would like,” D’Alberto told Speedcafe.com.

“They believe in me and have given me another shot. I think we are in with a chance of winning this race.

“Of course you are going to think about it (the crash), but hopefully once the race weekend gets underway I will be worrying about going faster and not last year.”