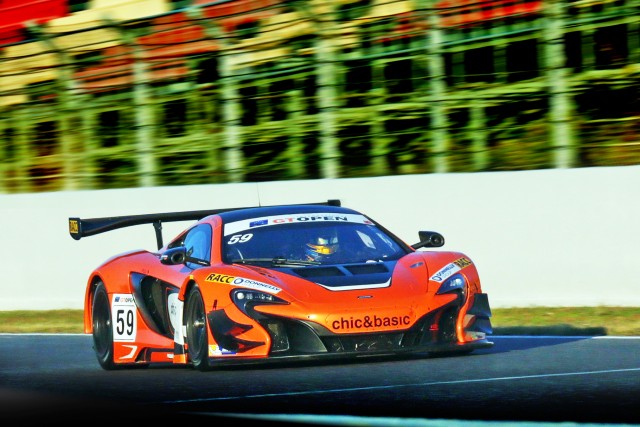 Boasting arguably its strongest possible driver line-up McLaren is determined to make an impact at this weekend’s Bathurst 12 Hour.

Following in the footsteps of fellow British marque Bentley, the iconic brand is the latest to commit to a factory effort at the Mount Panorama GT classic, with the event representing a key part of its 2016 GT program.

McLaren has featured at the Bathurst 12 Hour in each of the last two years courtesy of a privateer entry from Tony Quinn.

However, a fourth place in 2014 is its best result when van Gisbergen and the marque’s GT boss Andrew Kirkaldy combined with Tony and Klark Quinn in a MP4-12C GT3.

Having committed to a two car factory effort, McLaren boss Kirkaldy says its important to leave a mark on the event.

“Bathurst is very important and Australia is an important market as GT racing has exploded in the last few years,” Kirkaldy told Speedcafe.com.

“I think it is key that we are there and we make a showing.

“It is a fantastic circuit and if you asked all the guys at the workshop in Britain what race they would like to do, then they would all say Bathurst.

“We have done Bathurst before with Tony Quinn but we have only ever been there with one car. We were keen to get there this year with two 650S GT3s as it is always difficult in a 12 Hour race with only the one car.

“Any race we go to we are there to win. We won two rounds of Blancpain last year and at the moment it is one of the strongest GT championships in the world.

“We are certainly there to win. We have put out as strong a driver line up as we can. Those were the drivers that were available to us but they are clearly a good bunch.

“It helps having Shane (van Gisbergen) who obviously knows the track and has raced with us. He has made a big impression two years ago and the fact that he has done a lot with us it was an obvious choice.”

While the event is important for McLaren to show its GT strength to the world, the race represents a significant moment for Gold Coast-based Tekno Autosports.

Having received the honour of being selected by McLaren to run its Bathurst 12 Hour program, the operation will be keen to impress with McLaren GT sporting director Bas Leinders in attendance.

“We are really excited to pair up with McLaren. We have two competitive cars and six really fast drivers so it is something as a group we are really looking forward to,” Webb told Speedcafe.com.

“The idea from McLaren and Tekno is that if we are going to go to all this effort and expense to be there then we want to be in the best shape possible to put two cars on the podium.”

The partnership could be extended beyond the Bathurst 12 Hour with McLaren and Tekno evaluating an entry into the Australian GT Championship this year.