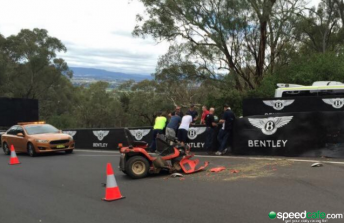 A man has been involved in a serious accident while operating a ride-on lawn mower at Mount Panorama. pic via twitter

A man has been taken to hospital after crashing a ride-on lawn mower during final preparations for the Bathurst 12 Hour.

The man had been cutting grass verges at the famous Mount Panorama circuit when he lost control of the machine at Forrest’s Elbow.

He was treated at the scene before being transported to Orange Base hospital with unspecified injuries.

News of the incident quickly spread via social media as teams and drivers undertook their track walks ahead of tomorrow’s opening practice.

Old mate had a bit of understeer at the elbow #shunted #bathurst12hour pic.twitter.com/Vw8DRBGeBD