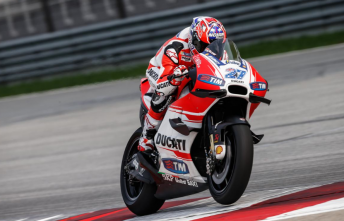 Casey Stoner says he has no plans for any wildcard rides with Ducati in MotoGP this year following his appearance in the Sepang pre-season test.

Expectations of a competitive return have increased following the Australian’s decision to leave Honda to take up a development rider role at Ducati.

The move has seen the former two-time world champion make his first appearance in an official MotoGP session since announcing his retirement from the sport in 2012.

Despite impressing by recording the ninth fastest time just over a second shy of the pace on a 2015 specification machine, he maintains there is no intention to make a competitive race return.

“No. I have no intention of doing that (racing),” Stoner told media at Sepang.

“It was nice to be back on track to get the data, but I’m still going to enjoy watching from the side of the track rather than being involved.

“It was nice to be back on track at the same time as the other riders, more just for the fact that the track wasn’t dirty and we had the same conditions as everyone else.

“We’re getting the same feedback as the other guys in the team, and this is important for us to move the bike forward.”

Stoner will continue his testing duties with Ducati in today’s final day of the Sepang pre-season test.