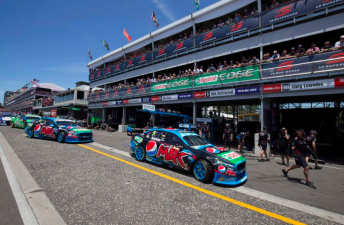 The release of the V8 Supercars pitlane order today has confirmed the pairings for all 13 pit booms.

The list reveals that Chaz Mostert has been moved into the team’s #55 Rod Nash Racing entry, which shares with Chris Pither’s Super Black Ford.

Winterbottom is meanwhile partnered with ‘TBA’ in car #6, which will be fielded for the soon-to-be-announced Cameron Waters.

While commercial considerations have been stated as the reason for the split, the change crucially ensures that the squad will not have to ‘stack’ its star drivers in pitstops.

The pitlane order is set off of the previous year’s Teams’ Championship result, with grouping applied where appropriate.

Further down the order, Charlie Schwerkolt’s new Team 18 will work with Brad Jones Racing on pitstops for their respective Lee Holdsworth and Tim Blanchard driven cars.