Craig Lowndes with his TeamVortex Holden

Craig Lowndes has unveiled the new TeamVortex livery he will campaign in the 2016 V8 Supercars Championship at Sydney’s Darling Harbour.

As well as showing the colours in public for the first time, it was also confirmed that the three-time V8 series champ will be engineered by the highly experienced Australian-based Frenchman Ludo Lacroix.

“I couldn’t have asked for a better team around me heading into the 2016 V8 Supercars Championship,” Lowndes said. “Both the team and I have a brilliant relationship with Caltex, so I couldn’t have been happier when I found out I’ll be driving the TeamVortex Holden.

“I’m really looking forward to getting on track and getting the 2016 season started at the Clipsal 500. Hopefully Steve Richards and I will be able to bring home the Bathurst trophy again later in the year, and really give Caltex and all our other sponsors a debut season to remember.” The formation of TeamVortex comes after the Triple Eight Race Engineering announced Shane van Gisbergen in the sister Red Bull Racing Australia team. Lowndes has had an existing brand ambassador role with Caltex for almost a decade. 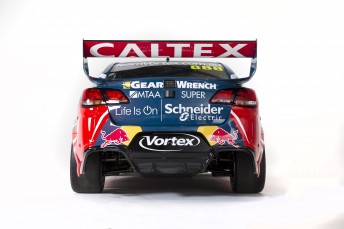 “For our customers, look out for exciting new promotions with Vortex premium fuel as we celebrate Craig and TeamVortex taking to the track in 2016,”

Lucroix is a well-established member of the Triple Eight family having joined the team in 1999 as part of the British Touring Car Championship winning operation.

Having moved to Australia with Triple Eight in 2003, Lacroix has been influential in shaping not just the engineering direction of the team, but of the sport as a whole.

Triple Eight Team Owner and Managing Director Roland Dane said he was pleased to further expand the team with confirmation that Andrew Simpson will take on the role of team manager and John McGregor moves across to TeamVortex as data engineer.

“The partnership, which has grown and strengthened over the last decade, has allowed us to build engineering expertise here for the betterment of the Triple Eight team, giving us a unique opportunity to give Craig a platform to continue to rack up race wins,” said Dane.

“We’re all greatly looking forward to what we’re sure will be a tremendous debut year for TeamVortex and we’re proud to have the support of an excellent group of team partners around us.”