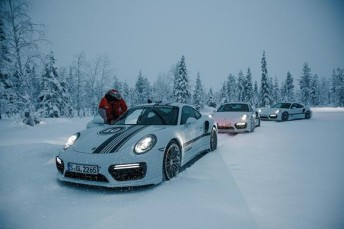 A quartet of Australian Carrera Cup drivers has completed a unique driving challenge on frozen lakes in Finland.

The drivers were put through a variety of challenges in a mix of road and competition machines including the Carrera S, Carrera 4S Turbo, Turbo S, GT3 RS and Carrera Cup car and GT3 Cup.

“The whole experience was surreal. Racing in Carrera Cup is amazing, but driving Porsche sports cars, and even a Carrera Cup car, on ice is quite unreal,” 2015 Carrera Cup runner-up Campbell commented.

“Growing up in Australia you don’t get to experience anything remotely close to driving on snow and ice, let alone experiencing such cold temperatures.

“It was great to be able to translate what I’ve learned about driving a Porsche on a race track into driving one on ice.”

TAG Heuer Carrera Challenge racer, Bates said it was an eye-opener to drive cars on such a low traction surface.

“The whole experience was amazing, from driving in completely foreign conditions in temperatures as low as minus 20 degrees, to seeing how the cars performed with such little traction,” Bates said.

The Porsche Carrera Cup Australia championship starts at the Clipsal 500 from March 3-6.