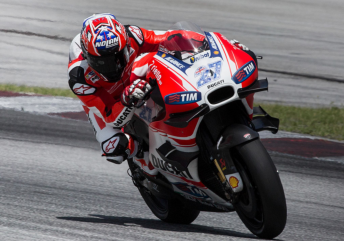 Casey Stoner aboard the factory Ducati

Casey Stoner measured himself against MotoGP’s current crop for the first time since 2012 as he took part in the second day of the pre-season test at Sepang.

The former two-time MotoGP champion completed 45 timed laps aboard a 2015 specification Ducati in his role as development rider for the Italian manufacturer.

The session was Stoner’s first official timed MotoGP outing since he announced his retirement from the sport at the end of 2012.

Petrucci’s session best 2:00.095s was half a second quicker than the benchmark set by reigning MotoGP champion Jorge Lorenzo on Monday.

The test was brought to halt in the morning when Avintia Ducati rider Loris Baz escaped a frightening 290km/h crash.

Officials red flagged the session for more than hour to determine the cause of the accident.

Michelin withdrew its soft compound tyre which was being utilised by Baz at the time of the crash as a precaution.

Baz rejoined the action once the session resumed.

Despite suffering a fall, Lorenzo emerged in second spot just 0.060s adrift of Petrucci with the sister Avintia Ducati of Hector Barbera in third.

The satellite LCR Honda of Cal Crutchlow continued his impressive display in fifth ahead of Valentino Rossi in sixth.