The Class A GT3 field has been reduced to 22 runners following the scratching of the #7 Garth Walden Racing Mercedes SLS AMG and the #29 Trofeo Motorsport Ferrari 458.

As a result, the entry list is significantly down on last year when 50 cars started the race, which was the second biggest grid since the event was reborn in 2007.

Last year saw 29 GT3 cars enter the race which was also a record for the class that was introduced in 2011.

The GT3 entry has not been helped by the fact the 2016 models from Ferrari, Mercedes, BMW and Porsche are not eligible for the event with SRO homolgation due after the 12 Hour.

Garth Walden Racing has elected not to risk its car at the once around the clock event ahead of the upcoming Australian GT Championship opener at Adelaide’s Clipsal 500.

Last year the outfit was forced to re-shell their car after sustaining a heavy crash at The Chase during the second half of the race.

Delays in the arrival of a newly ordered 2015 specification Ferrari 458 meanwhile ended Trofeo Motorsport’s hopes of tackling the race. 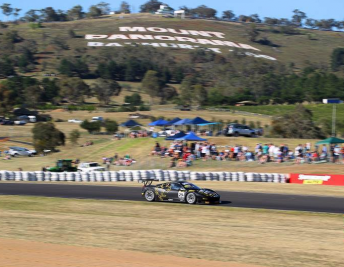 While the loss of two GT3 cars has depleted the entry slightly, Class A still features the mouth watering prospect of factory backed efforts from Nissan, Bentley, McLaren and Audi, alongside strong private Ferrari and Lamborghini teams.

Meanwhile, Class C has been amalgamated into Class I after only two Prosport Performance Porsches were originally entered for the category.

Only one of the Cayman GT4s has made the trip for its Class I assault.

Bathurst 12 hour grids since the event was revived in 2007