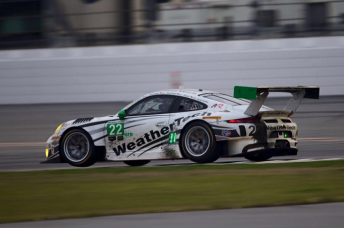 Shane van Gisbergen has been left ‘gutted’ after his quest for a Daytona 24 Hour class victory came apart in spectacular fashion during the race’s closing stages.

The V8 Supercars star was at the wheel of the #22 Alex Job Racing Porsche when the rear wing mounts failed, sending the Kiwi spinning through the infield at the high speed back chicane.

Proving a front-running contender throughout, the failure occurred as Van Gisbergen was closing on the class lead with little over an hour to go.

After a lengthy pitstop for repairs, Van Gisbergen drove the still wounded car to the flag 13th in class.

“It wasn’t good at the end,” said Van Gisbergen of the car he shared with Leh Keen, David MacNeil, Cooper MacNeil and Gunnar Jeannette.

“I am just gutted. It was a freak thing. I noticed it into Turn 1. I could see it wasn’t right in the mirror.

“A couple turns later it just spun me out in spectacular fashion. It was a big moment.

“The car was running great up to that moment. I think the WeatherTech Porsche got better as we got deeper into the race. It was a tough Daytona for the Ganassi team

The GTD class was eventually won by Magnus Racing, giving the new Audi R8 LMS a perfect debut on US soil.

Victory eluded the strong Kiwi contingent in all four classes, despite some strong individual drives.

Reigning outright winner Scott Dixon finished 13th in the #02 Ganassi Riley-Ford, 28 laps down on the winners after struggling with brake problems throughout.

“The last thing you want is to go into a corner at 190mph and not have any brakes,” reflected Dixon.

“I think that happened to all of the drivers in the #02, except for Jamie (McMurray), so I’m just glad everybody got away safe.”

Countryman Brendon Hartley was part of the driver line-up in the sister #01 entry, which finished six laps down in fifth place after also requiring an extended spell in the garage.

It was a low key end to Ganassi’s highly successful Daytona Prototype program, which has taken a back seat to the squad’s new GTLM factory Ford effort.

The new Fords suffered an inauspicious debut as mechanical dramas cruelled the charge of their two-car line-up, which included the race’s Australian hope Ryan Briscoe. Earl Bamber was the only Australasian to score a class podium, with his Porsche third in GTLM after being out-gunned by the Corvettes in the closing stages.

“We fought hard and to come away with a podium is great,” said Bamber, whose team debuted its latest RSR model at Daytona.

“I think it’s the most we could have asked for coming here this weekend.”

Van Gisbergen and Bamber will both be in action at this weekend’s Bathurst 12 Hour, driving a Tekno Autosports McLaren (Class A) and Grove Porsche (Class B respectively).