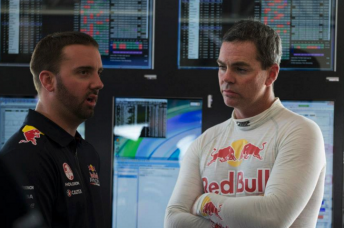 McPherson and Lowndes have been split for 2016

The team has confirmed McPherson’s move onto Van Gisbergen’s entry, as well as the continuation of the Jamie Whincup-David Cauchi partnership.

A new engineer for Lowndes, whose TeamVortex entry is set to be officially launched on Wednesday, is yet to be confirmed.

McPherson made a high profile defection from Prodrive to Red Bull ahead of the 2015 season, where he quickly established a strong working relationship with Lowndes.

The engineer however says he’s excited to be linking with Van Gisbergen, who joins the squad after three seasons at satellite team Tekno Autosports.

“Shane is one of the most talented drivers in our sport, so it is incredibly exciting to be working with him in 2016,” said McPherson.

“He is a serious championship contender, so we will be working very hard to convert him into a championship victor.

“From our early chats I feel that we will work well together, and I can’t wait to shakedown our new car and have a productive test before Clipsal.”

Cauchi engineered Whincup to the 2014 title before a rough start to last season saw him temporarily moved aside for Mark Dutton.

Having returned to the race engineer role for the year’s final three events, Cauchi is looking forward to building on a strong end to the year.

“It was very satisfying to see all of the hard work the entire team put in last year convert into race wins and podiums,” said Cauchi.

“Our car speed was a lot more consistent and we could focus on fine tuning the car for Jamie.

“Everyone was working really well together and enjoying going racing so I am expecting to come out the gate firing in 2016.”