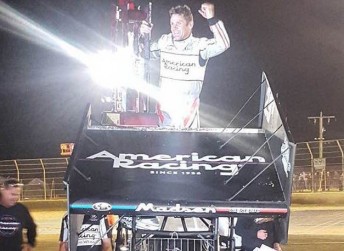 Thirteen years after his maiden national crown, Madsen collected the $20,000 booty ahead of polesitter Brooke Tatnell and Jamie Veal.

The 44-year-old celebrated with a series of wild donuts after a string of second placings in the past week at the venue.

“This is just awesome; I’m so bloody happy to win the title again,” an ecstatic Madsen said.

“We’ve been so close all week here, I feel like we earned this one tonight.”

Madsen started on the outside of the front row for the final with Tatnell leading the opening 10 laps of the 40-lap feature.

It’s a fitting result for the driver who finished second to Donny Schatz in the Knoxville Nationals last year.

The Championships completed a stunning week of racing at Warrnambool that began with Veal’s Grand Annual victory.